The northern water snake is a thick, medium-length snake marked with dark splotches and bands on a lighter background. It is active in the daytime. In Minnesota, it is most often found in vegetation along or swimming in water near the St. Croix, Mississippi, and Minnesota rivers.

General description: This 2- to 3-foot-long snake comes in many color variations. Generally, it has a gray or brown background with red or brown bands near its neck, irregular patches on its back, a ringed tail, and spots on its sides.

Size: Newborn northern water snakes are 6 to 10 inches long. They grow to be 24 to 42 inches. Females are generally bigger than males.

Color: Color varies substantially in this species. The background color tends to be gray or brown and the markings are brown or reddish. Its belly is lighter colored with dark, crescent-shaped spots. Very large northern water snakes may appear completely brown or black.

Baby water snakes are born in June, July, or August. The mother gives birth to five to 60 young, sometimes over a period of several days. One female was observed to give birth to 99 babies. The young are 7 to 10 inches long.

These snakes eat frogs, turtles, fish, and other small animals found in their habitat. Sometimes they will round up fish or tadpoles with their long bodies and them eat them, or simply swim through a school of fish with their mouths open. Northern water snakes may also eat dead fish.

Birds of prey, raccoons, other snakes. 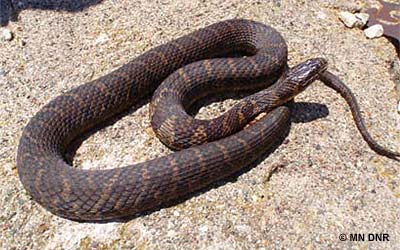 Northern water snakes live in vegetation along waterways. In Minnesota, they are most often found along the St. Croix and the Mississippi, especially in the southeast. Many winter in rock crevices, often with other snakes. They can swim well, and have been known to remain underwater for more than an hour at a time.

Even though it's not venomous, you probably don't want to tangle with this snake. If you pick it up it will give off a bad smell, defecate, and maybe even throw up its last meal. It will also bite. Its saliva contains a substance that inhibits its victim's blood from clotting.