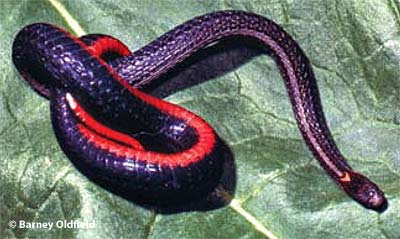 This tiny, nonvenomous snake, also known as the redbelly snake, is Minnesota's smallest snake. It is found through the state, in woods or sandy areas near sources of water. It gets it name from its most distinguishing characteristic--its bright red or pink underside. 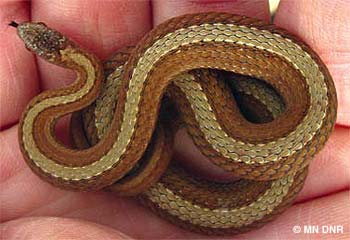 General description: About the size of a large nightcrawler, the redbelly snake is brown or gray. It has lengthwise stripes on top and a red belly below.

Size: Redbelly snakes are less than 4 inches long when they are born. They grow to 8 to 10 inches.

Color: Redbelly snakes come in two color variations. One is brown or reddish-brown with a single lighter stripe. The other is gray with four dark stripes. Both have red undersides.

In Minnesota, redbelly snakes mate in spring and give birth in late summer. Litter size is 1 – 23 young, with average litter size of 8.

Birds of prey, skunks, other snakes.

The redbelly snake is found in woodlands and forest edges often near water. It lives throughout Minnesota, including the far northeastern part of the state, which harbors few snake species. They spend winters in rock crevices and ant mounds.

The redbelly snake has no special status in Minnesota.