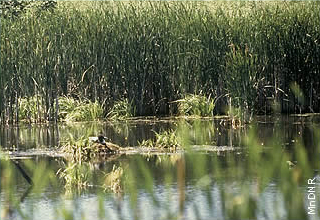 Emergent species are rooted in soil beneath the surface of the water, but have a portion of their stem and leaves growing above the water. Where emergent plants occur together in a community, it is called a marsh.

Marshes occur throughout Minnesota, typically along the margins of lakes and slow-moving streams or in shallow ponds. Cattails (Typha latifolia and Typha angustifolia) are the most common and abundant marsh species in Minnesota and can spread through underground stems to form dense stands.

But even in dense cattail stands there will be a diversity of other plant species, including swamp milkweed (Asclepias incarnata), northern marsh fern (Thelypteris palustris), and marsh skullcap (Scutellaria galericulata).

Cattails can be uprooted by strong waves, so they rarely grow on the east side of large lakes where wave action is often severe. They usually do best in quiet bays or on smaller lakes. Muskrats will also uproot cattails to dine on the starchy tubers, but if the cattail stand is vigorous, muskrats will not usually deplete it.