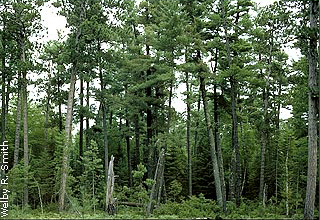 Coniferous or "cone-bearing" trees include primarily the pines, spruces, tamarack, balsam fir, and cedar. These are the trees foresters often call "softwoods".

All of the conifers have long, needle-like leaves, and all, except tamarack are evergreen. They are the most characteristic group of trees in northern Minnesota, and can be found growing under just about any type of conditions. Red pine and jack pine generally do best on dryer sandy or rocky soils. White pine can occur on dry soils but also does well on deep, moist, loamy soils. White spruce and balsam fir frequently occur together on moist upland soils, and black spruce, tamarack and white cedar prefer wet, swampy soils.

Pine-dominated forests were more common in Minnesota before the logging era, but timber harvests resulted in a drastic decline in pine and an increase in aspen, which is now the predominate tree in Minnesota.