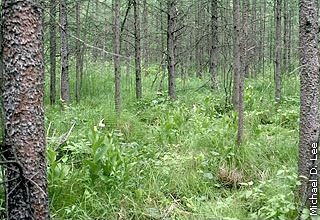 Conifers are sometimes called "evergreen" trees because they keep their leaves, or needles, all year (except tamarack which loses its needles each fall).

All three conifer species are normally found in saturated, acidic, peat soil, often with Sphagnum moss. They also do well in wet loamy or sandy soil. Northern white cedar is tolerant of shade, and grows well beneath a canopy of other trees, but black spruce and tamarack need full sunlight to thrive.