Plant communities flourish or perish depending on their environmental conditions. As these conditions change, the types of plants that make up the community may also change. This process is called succession. In a stable community, the plants are well suited to the amount of water, nutrients, and sunlight available to them. As the availability of these resources changes, the conditions may favor a different set of plants, and these plants will become more abundant. This causes a shift in the makeup of the plant community. In effect, the new plants succeed the old, creating a slightly different community. Events can cause change in a plant community. Such disturbances can include windstorms, wildfires, insect infestations, and widespread disease.

In a mature deciduous forest dominated by maple and basswood trees, fire can provide a dramatic example of succession. Following a fire disturbance, the charred land is friendly terrain for some species and hostile to others. Grasses and other nonwoody plants are first to pioneer the newly disturbed area. These are soon followed by bushes such as raspberry. Species that do well in full sun, such as boxelder, ash, and cherry, are the first trees to recolonize the area. As these trees mature they shade the forest floor, making it difficult for their own young to grow. Shade-loving species such as maple and basswood find themselves at a competitive advantage, and the species composition of the forest slowly shifts. Over time, the older sun-loving trees die out and the shade-tolerant species take over. The process may take hundreds of years, but left undisturbed, this forest will evolve into a plant community dominated once again by maple and basswood.

Succession in a deciduous forest 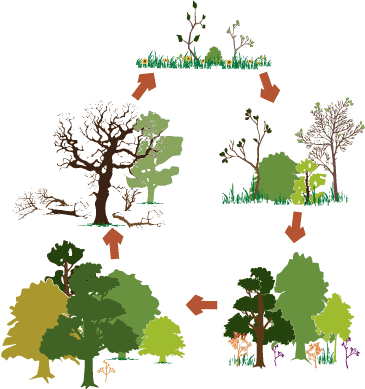 In an undisturbed setting, succession progresses from pioneer grasses and shrubs to mature trees that return to pioneer grasses. However, disturbance, such as a wildfire, windstorm, or insect infestation, can happen at anytime and interrupt the cycle. This returns the forest to an earlier stage of succession and the process begins again.