What is a native Plant? 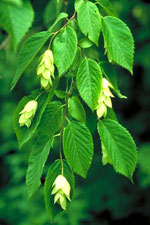 Native plants are plant species that were growing in Minnesota's biomes when European immigrants first arrived in this state. These plant species, along with the mammals, birds, fish, insects, and other living things, help to make each biome unique.

European settlement brought changes to the landscape including farming, logging, and building communities. Settlers also brought plants from their homeland to grow in Minnesota. Some of the new plants introduced to Minnesota were very competitive and quickly crowded out existing native plants. In some places these invaders have spread out of control—such as European buckthorn in deciduous forests, purple loosestrife in wetlands, and leafy spurge in prairies.

Along with the new plants, diseases and insects came into the state. Native plants were often defenseless against these new pests. For example, the American elm, once a dominant tree in Minnesota’s deciduous forests, had its numbers decimated due to the invasion of Dutch elm disease.

Since European settlement, many changes have occurred across all of Minnesota’s biomes. It is important to note that as native plant communities are altered, so, too, are the animal species that live within them.

What can we do to help?

In our own yards we can make a difference by planting native plants and avoiding exotic plants that may spread into wild areas. We may not be able to return to the landscape of 200 years ago, but we can preserve what is left and restore some of the native plant communities that support so many other species.