Drought is defined as a period of abnormally dry and/or unusually hot weather sufficiently prolonged for the corresponding deficiency of water to cause a serious hydrologic imbalance.

Drought has Eased in Much of Minnesota

Significant rainfall across much of Minnesota in September and October brought improvement in drought conditions in much of the state. As of November 16:

Weekly drought updates have ended for 2021. Further updates will be posted and distributed as needed.

Because of significant rain in September and October:

The Lake Superior watershed remains in the warning phase.

The DNR will be contacting local governments and water suppliers in areas where conditions have improved enough to change the drought intensity classification and related water use restrictions. Water users, including business and residential users, should watch for information from their city or county government before returning to more water use.

The entire state entered the drought warning phase in mid-July. Climactic factors that are used to categorize drought, and the possible impacts observed in each category, are explained in the U.S. Drought Monitor’s Drought Classification.

The criteria for designation of a drought restrictive phase are specified in the Minnesota Statewide Drought Plan, and include the drought severity rating and, for the Mississippi River, flow rates at the Brooklyn Park gauge operated by the US Geological Service. 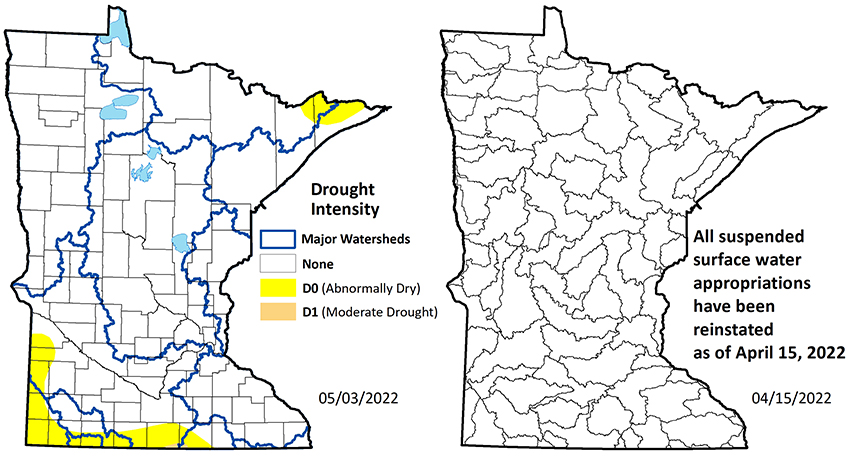 (reload/refresh browser to ensure the current maps are displayed)

Even with recent rainfall, it will take at least three to six inches of precipitation spread over a period of about one month to significantly alleviate the drought. Soils are more efficiently replenished by multiple rainfall events than by any single heavy rainfall event. Surface water and groundwater respond somewhat differently over time. It is also important to note that annual precipitation averages vary widely across Minnesota, from less than 19 inches in northwestern Minnesota to 32 inches in the southeastern corner of the state.

Droughts frequently persist from one year to the next, depending in part on precipitation in winter and, to a greater extent, spring. A deep late-winter snow pack, frozen soil which prohibits infiltration, rapid snow melt and heavy early spring precipitation can rapidly shift concerns from drought to potential flooding. Winter and early spring precipitation and temperatures will help determine whether or to what degree the 2021 drought will continue into the 2022 growing season.

Drought conditions elevated fire danger in roughly the northern two-thirds of the state, triggering varying degrees of burning restrictions across all of Minnesota.

What Happens in Drought Restrictive Phase

For watersheds in the drought restrictive phase, the DNR and others have taken additional steps, including:

Per the Minnesota Statewide Drought Plan, the Minnesota DNR determines state drought phases and responses based on specific climatological and water data. Task Force members may share information and perspectives regarding these factors, but making phase determinations is not a role of the Task Force. 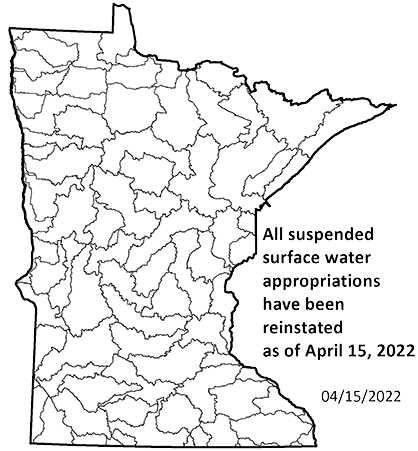 Related to drought conditions, but not part of the State Drought Plan, is the requirement to protect instream uses and downstream public water supplies during periods of low flow.

The majority of watersheds in the state have a long-term water gauge that allows the DNR to monitor flow rates. The data collected from these gauges is utilized to quantify base flows as well as peak and low flow conditions. DNR staff continually monitor the flows in these major watersheds to determine when the low flow threshold has been reached. The threshold is based on statistical analysis that calculates what is called the Q90 flow. The Q90 value indicates that 90% of the time in recent decades, stream flow has been greater than that value. In other words, the stream flow has only been that level or below 10% of the time. Q90 is considered protected low flow level in Minnesota and is used for suspending surface water appropriations.

The drought conditions have resulted in several watersheds falling below the low flow threshold that triggers suspension of surface water appropriations. Some surface water appropriation permit holders will likely be suspended through the winter as flows in some watersheds have not recovered to a point where permits can be reinstated. The DNR will notify permit holders of this likelihood and will monitor flows near the end of winter and early spring if permit reinstatements are warranted.

The DNR’s surface water suspension guidelines identify the many factors that need to be considered for both permit suspension and permit reinstatement. The variability of these natural systems requires a holistic approach that can incorporate a broad array of inputs as part of decision-making. At a minimum, river flows need to above the minimum flow (Q90) for three consecutive days, but not just slightly above the minimum. The flow must be high enough so all surface appropriations do not reduce the flow back below the minimum flow. Precipitation forecasts are also considered when determining whether permits should be re-instated. These careful evaluations help to avoid re-suspending permits shortly after having them reinstated. That pattern would not be good for the aquatic ecosystem and could create frustration or confusion for permit holders.

The lack of precipitation has reduced water levels in many lakes and rivers. Water level fluctuations are natural. Occasional low water levels can be beneficial to ecosystems, but they can affect people, recreation and businesses that are dependent on water.

Lake and river levels are dependent on the amount of precipitation an area receives, how much of that moisture is contributed by runoff, how much water is recharged or discharged through groundwater, and how much water evaporates.

Manipulation of lake levels, such as adding or removing stop logs at lake outlets, requires DNR authorization under a public water works permit. Any unauthorized lake level manipulation is illegal.

What Can I Do?