An estimate of Minnesota's summer population of adult common loons 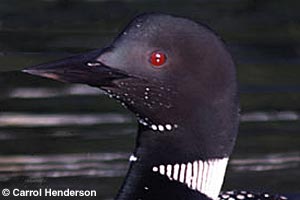 Loonwatch and the Nongame Wildlife Program conducted Minnesota's first statewide population estimate of common loons using volunteers in 1989. Over 600 volunteers and biologists searched for loons on 723 lakes > 10 acres from the ground, water, and air. The calculated estimate was 11,626 adult common loons with a 95% confidence interval of 1,271 (10.9%). Surveyors reported at least one adult loon on 49.5% of the sample lakes. Lakes with loons tended to occur more often in west-central, north-central, and northeastern parts of the state. Occupancy rates were greatest on lakes in the 150-499 acre size class with nearly two-thirds of the lakes harboring loons.

Minnesota currently has the largest summer population of common loons in the lower 48 states. The 1989 survey did not identify trends in the population, but established a baseline from which trends can be estimated. Additionally, it verified range shrinkage since pre-settlement times and revealed a large number of lakes that have become dry or marshy since the mid-1900's.

Discussion of the results of the survey

The occupancy rates (by lake size and by county) suggest that loons are most common in the north-central and northeastern parts of Minnesota, corresponding to the forested and lightly settled parts of the state. Low occupancy rates were primarily in southern and northwestern counties. While loons were not observed on any lakes in nine counties, it is likely that some loons summer in these areas. A larger sample of lakes, particularly those most likely to harbor loons, would be necessary to conclude that no loons summer in those counties.

Loons were more likely to be found on lakes > 150 acres because the vast majority of lakes are in this size class. Therefore, the importance of small lakes to the loon population should not be overlooked. The recent discovery of multi-lake territories in Michigan's western Upper Peninsula and northeastern Wisconsin (Miller and Dring 1988), a phenomenon that occurs primarily on lakes <50 acres in close proximity to one another, suggests that occupancy rates on small lakes be interpreted cautiously. Loon pairs may defend two to four small lakes, but their presence on only one lake at any time will lower occupancy rate estimates. The proportion of lakes actually being used by resident loons, however, may be substantially higher.

Mean numbers of loons per lake are similar to those reported by Olson (1986) in northern Wisconsin. Few conclusions should be drawn from correlations between lake size and mean numbers of loons observed because the means for the two smallest size classes were greatly affected by the large numbers of lakes with zero loons. Loons were absent on over half the sample lakes in these size classes. Additionally, the aerial survey technique used on lakes > 500 acres almost always counts less than 75% of the actual number of loons present (Dibello et al. 1984). The proper interpretation of these statistics is that they represent the average number of loons one is likely to see on a lake of a given size class selected at random from all of the lakes in that size class in the survey area. 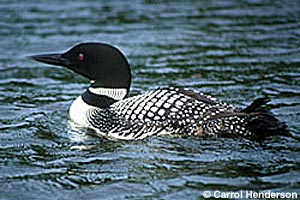 The intent of this project was to estimate Minnesota's summer adult population of common loons based on a random sample of lakes that were potential loon habitat. Early on we discovered that the most comprehensive data on Minnesota lakes (MDNR 1968) were derived from aerial photography taken between 1938 and 1955. Many water bodies listed as open water lakes in this reference have since been drained or ditched, leaving them marshy and dry. Additionally, water bodies already in one of these conditions were contained in the database. Therefore, the original sample contained some lakes that had low or zero probability of harboring loons.

We did not assign lakes known to be marshes or dry lake beds to volunteers on the assumption that no loons would be present on them. Some lakes surveyed by volunteers were reported as dry or marshy and were included in the estimate.

First, considerable time and money were necessary to recruit, correspond with, and assign lakes to volunteers. Recruitment was reasonably simple, due no doubt to the popularity of loons and to the fact that many people independently monitor loon activity on lakes.

Second, volunteers seemed to have a preconceived notion that they would be able to count the loons on a lake they had chosen in advance. Despite numerous efforts to explain the importance of "randomness" in the survey design, many volunteers were disgruntled when they learned that they would not be able to count the loons on "their" lake. This confusion may have been an after-effect of the surveys conducted in 1971 and 1986 (McIntyre 1988a) and 1980 (Hirsch and Henderson 1980), and the ongoing data collection conducted by the Minnesota DNR in which volunteers are allowed to observe loons on the lake(s) of their choosing. A similar problem occurred in the 1985 Wisconsin survey.

The results of this survey indicate that Minnesota has a large summer common loon population. However, because it is the first estimate of its kind for loons, it does not indicate any trend in population size, distribution, reproductive success, or habitat suitability. It would be prudent to either repeat this survey periodically, or implement a monitoring program designed to detect significant changes in Minnesota's common loon population.

If it is decided that repeating the survey is most desirable, we recommend that it be conducted every five years for three reasons. First, large amounts of time, effort, and funds were needed to conduct the survey and it would be logistically and economically infeasible to conduct in annually. The estimated cost of time and expenses associated with planning, implementing, and reporting this survey was $40,000. Second, the common loon population is large and widely distributed, and is harbored on lakes surrounded by a variety of public and private lands; it is in no immediate danger of sudden population decline resulting from changes on the breeding grounds. Third, because adult loon populations probably change slowly due to low reproductive rates, recruitment, and adult mortality rates, it is unlikely that short-interval surveys would be able to detect small changes in the population.

At the same time, we believe that some effort should be made to assess the reproductive success of the breeding population and the habitat quality of important breeding lakes. Minnesota's adult loon population could remain nearly stationary for a number of years with little or no reproduction. Periodic surveys of reproductive success would augment data on the adult population. McIntyre's (1988a) study suggested that lakeshore development and lake recreation may have been correlated with decreases in some loon population parameters. Further investigation of this phenomenon seems warranted. Additionally, the large number of lakes that have become dry or marshy since the photography for Bulletin 25 was taken is disconcerting. A survey to update the status of Minnesota's lakes should be a high priority for the near future.

The methodology used in the 1989 Minnesota Loon Survey allowed for a scientifically valid estimate of the state's summer loon population, established a list of lakes and volunteers that can be used in future surveys, and generated substantial positive public relations for wildlife protection in Minnesota. The estimate of about 12,000 adult common loons is probably a minimum because the survey methodology undercounted loons on lakes >500 acres and because the lake list used to establish the sample contained many lakes that were dry or marshy.