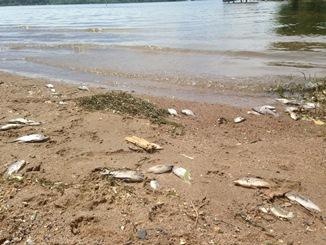 As many as 500 fish die-offs can happen each year in Minnesota, most of them from natural causes. If you see one, report it. Early reports allow timely water samples and other investigative responses to be taken if needed.

Most fish diseases and infection issues found in nature tend to be concentrated in fish of a specific species and size range. In contrast, when a die-off includes fish of vastly different sizes and multiple species, human activity is a more likely cause.

To report a fish kill

Call the state duty officer at 651‐649‐5451 or 800‐422‐0798 to report fish die-offs. The duty officer provides a single point of contact for the incident and is available 24 hours a day seven days a week. Try to describe the fish types and sizes affected by the kill.

Groupings of dead fish usually are the result of common, opportunistic infections. These infections tend to affect fish as water temperatures warm and fish are stressed from the energy they spent on spawning. Such infections can kill sunfish, crappies and bullheads, and occasionally, largemouth bass and northern pike.

The retreat of lake and stream ice can sometimes leaves behind dead fish, commonly referred to as winterkill.

When snow and ice cover a lake, they limit the sunlight reaching aquatic plants. The plants cut back on the amount of oxygen they produce. If vegetation dies from lack of sunlight, the plants start to decompose, which uses oxygen dissolved in the water. If oxygen depletion becomes severe enough, fish die.