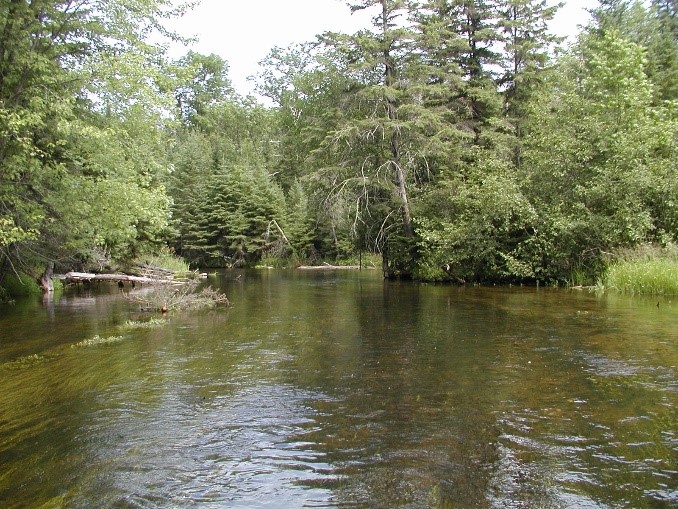 Straight River starts at the outlet of Straight Lake in Osage, MN and flows into the Fishhook River 3 miles south of Park Rapids. It contains brown trout.

Trout survive throughout most of the Straight River, with different habitats supporting different numbers and sizes of trout. Areas with springs or seeps are important source of cold water to support the trout fishery, and these areas are especially important with warm water temperatures in July and August. Through the fall, winter and spring trout move throughout the Straight River, and some even move downstream into the Fish Hook River. Shallow areas with faster water, and sand or gravel bottoms support most of the natural reproduction for the river. These areas have high numbers of fish, but they are generally smaller fish. These areas occur from 1 mile west of CR 117 to above CR 123. Areas that have slower water, are deeper with more silt and sand bottoms support lower numbers of trout, but they are generally larger fish. These areas occur from CR 115 to CR 125. The size distribution of sampled trout from all standard stations since 2000 was:

The shoreline on the Straight River in many areas is low lying wetlands, making walking the bank very challenging. Most of the stream is wadeable, but chest waders are required in many places. The entire river is accessible by kayak or canoe, but some areas have tight turns and some can be shallow. There are nine parcels of public land owned by either DNR Fisheries (5), DNR Forestry (3), or Becker County (1). Twenty-six state owned conservation easements administered by DNR Fisheries allow angling access along 8.6 miles of the river’s 17-mile length. Conservation easements allow anglers to use the banks to access the river or fish from banks. Large yellow signs are at the road crossings, while smaller brown signs along the river indicate where easements start and end. Please respect the easements and private lands where posted. Anglers can also access the river from road crossing right of ways, most of which have public land or easements adjacent to them. Up to date information and location of the DNR owned properties, and conservation easements are on the DNR’s recreational compass.

The Straight River has always followed the standard statewide stream trout fishing regulations. There are no special regulations in place.

The start of the Straight River is the outlet of the Straight Lake dam. Water temperatures immediately downstream of the dam are generally too warm to support Brown Trout. By the time the Straight River reaches the first road crossing at CR 123 groundwater seeps and spring have cooled the water temperatures to levels suitable for Brown Trout. The river is generally 30-40 feet wide, and the immediate riparian alternates between coniferous dominated upland forest, and wetland dominated areas. Bottom substrate is dominated by sand, but varies from gravel to silt depending on the gradient of the stream in that area.

Past projects have been aimed at improving trout habitat, and improving the function of the Straight River. Past work has included installing and renovating wing dams and log deflectors, and installing lunker structures and fiber logs to narrow and deepen the river. Most recently in 2006, 2007, 2011, 2015 and 2017 mature pine trees were placed by helicopter to try to narrow and deepen sections of the Straight River. This work has taken place from Hubbard CR 115 to 1 mile west of Hubbard CR 117. The areas targeted were up to five time wider than the stream should be, and were very shallow. This work took place to provide better habitat, especially for adult trout. Surveys of these areas have shown that the river has been getting narrower and deeper. Electrofishing surveys of these areas have shown trout in higher numbers and larger sizes.

A creel survey showed half of trout angling pressure, and the majority of the harvest on the Straight River occurs from trout opener in mid-April until Walleye opener in early May. A concentration of fishing pressure also occurs during the Hexagenia mayfly hatch in late June. One of the best times to target large trout is during the hatch when they are feeding on these large mayflies. Overall, the number of angler-hours spent on the stream were relatively low, the catch rates of trout were low but not unrewarding, the size distribution of the catch was broad, and angler release rates were high. The Straight River fishery is sustainable under the current statewide regulation. Most of the higher ground in the watershed is cropland using groundwater for center pivot irrigation. Because of this large scale use of groundwater for irrigation, a Groundwater Management Area was established in 2014, and the initial plan was completed in 2017. This plan will guide the DNR's efforts to sustainably manage groundwater appropriations in this area.