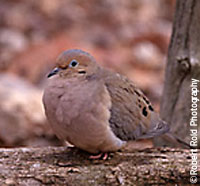 The Mourning Dove (Zenaida macroura) is a member of the pigeon family (Columbidae), it is similar to the common pigeon but is more uniformly gray with a pointed tail instead of a blunt-tipped tail. Mourning doves have grayish-brown colored backs and buff colored undersides. They have black spots on the wing coverts and near their ears. Their beaks are narrow and black, their eyes are brown, and their legs are dull red.

Mourning doves are swift fliers and travel at 30-40 mph. They can accelerate to speeds greater than 60 mph. They have a steady and rapid wing beat, which usually produces an audible whistling sound caused by wind traveling over the wing feathers. When mourning doves fly, they make abrupt changes in direction and speed. This is a defense against avian predators, like the Cooper's hawk.