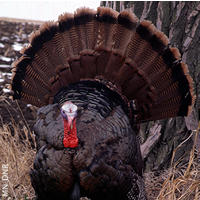 Occasionally reported by pioneers arriving in what is today Minnesota, the wild turkey had disappeared from the state by the turn of the century. Today wild turkey gobbles reverberate across most of the state.

As the state's wild turkey population has grown, harvest has followed suit. In the state's first wild turkey season in 1978, hunters bagged 94 birds. These days, hunters are harvesting more than 10,000 wild turkeys each spring. Some recent studies in the eastern United States show that spring mortality, which is caused predominantly by hunting, ranges from 25 to 40 percent of the total male population.

Wild turkey numbers took off only after years of trial and error. From the mid-1920s through the mid-1960s, sports groups tried raising young turkeys on game farms and releasing them into woods. Foxes and coyotes grew fat on the easy prey. Not until wily adult wild turkeys were trapped from other states and transplanted into Minnesota did the population gain a foothold. The first successful stockings occurred in 1973, when biologists traded 85 ruffed grouse for 29 wild turkeys from Missouri, which they released in Houston County.

Combing funds donated by the National Wild Turkey Federation and those from the DNR, biologists trapped wild turkeys in areas of southeastern Minnesota where birds were abundant and relocated them to suitable new areas throughout the farmland and transition areas of Minnesota. The wild turkey's range continues to expand west and north.