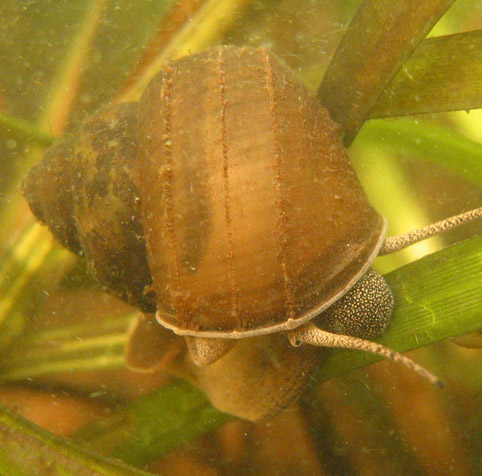 Origin: Chinese mystery snail (CMS) is native to Asia. It was brought to California in 1892 as a food source, and found in Massachusetts in 1915 — likely an aquarium release. The historic range of the banded mystery snail (BMS) is the southeastern U.S., primarily in the Mississippi River system up to Illinois. It is a popular aquarium snail that’s been released in Minnesota.

Impacts: Both snails can form dense aggregations. In Asia, the CMS can transmit human intestinal flukes, however, cases have not been documented in the United States. It also is a carrier of trematode parasites found in native mussels. BMS can cause mortality of largemouth bass embryos when they invade nests.

Status: CMS are present in over 80 waters and BMS occurs in about 50 waters in Minnesota. 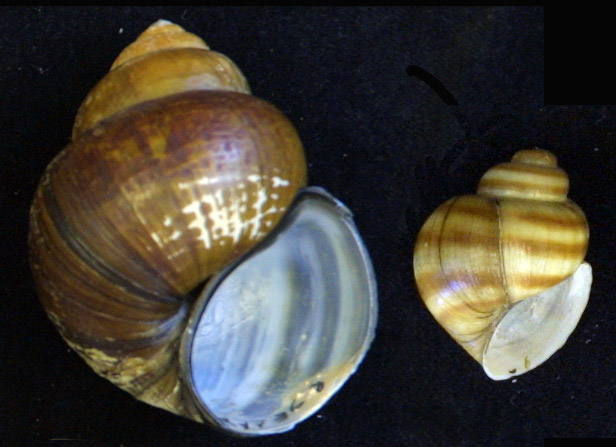 Where to look: They are mainly found in lakes and in slow moving rivers. They are called “mystery” snails because in spring, they give birth to young, fully developed snails that suddenly and mysteriously appear. After reproducing in their fourth year, they die and their shells wash up on shore.

Means of spread: Most likely introduced via dumping of aquariums and by transfer from one water body to another.

Keys to identification: Chinese mystery snail has small shallow depressions above the shell opening and rows of fine, short stiff hairs parallel to the whorl of the shell (may wear off with age and abrasion).

Banded mystery snail has red bands that are parallel to the whorl of the shell.

How people can help: