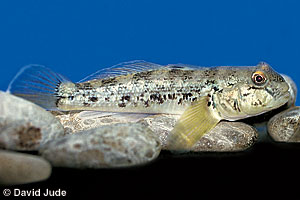 Large head, bulging eyes and torpedo-shaped body. They have a single scallop-shaped (fused) pelvic fin. No other native fish in the Great Lakes have a fused pelvic fin. The dorsal fin has an obvious black spot.

The round goby is an aggressive bottom-dwelling fish that feeds on a variety of macroinvertebrates, fish eggs and fry. Adults aggressively defend spawning sites and can spawn several times per year. Round gobies have been found at densities up to 20 individuals per square yard. They have a well developed sensory system that enhances their ability to detect water movement, allowing them to feed in complete darkness—a competitive advantage over other fishes.

The round goby is native to the freshwater region of Europe’s Black and Caspian Seas. The species was first confirmed in the United States’ St. Clair River in 1990. By 1999, the species was found in several locations within Lake Superior’s Duluth Harbor in Minnesota. Refer to EDDMapS Midwest for distribution information.

Round goby (Neogobius melanostomus) is a prohibited invasive species, which means it is unlawful (a misdemeanor) to possess, import, purchase, transport, or introduce this species except under a permit for disposal, control, research, or education.

Round goby infestations cause recreational, economic and ecological damage—changing how residents and visitors use and enjoy Minnesota waters.

People spread the round goby primarily through the improper use and disposal of live bait.

Report new occurrences of round goby to the DNR immediately by contacting your DNR Invasive Species Specialist or log in and submit a report through EDDMapS Midwest.

There is no known effective population control for round goby in natural water bodies at this time.