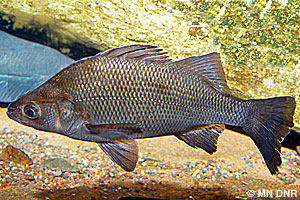 The white perch is not a true perch but rather a fish in the temperate bass family. Adults range between seven to 12 inches in length. They have grayish-green to dark green-brown backs, silver sides and silver-white undersides. They generally do not have stripes.

The white perch is a predacious and opportunistic feeder. Young feed primarily on zooplankton and adults feed on aquatic insect larvae, minnows and fish eggs. Spawning occurs over a period of 10 to 21 days with individual females expelling 20,000 and 150,000 eggs to be fertilized externally. The eggs stick to the bottom and hatch one to six days following fertilization.

The white perch is native to the Atlantic coastal region of the United States. It invaded the Great Lakes through the Erie and Welland canals, which bypass natural barriers. The species was unintentionally introduced into Lake Superior through the discharge of contaminated cargo ship ballast water as well as the improper use and disposal of live bait. Unauthorized stocking has been source of spread to inland waters in other states.

The first observation in Lake Superior’s Duluth Harbor was in 1986. The St. Louis River downstream of the Fond du Lac dam, Lake Superior, and its connected tributaries are listed as infested, but no other Minnesota water bodies are known to contain the species. Refer to EDDMapS Midwest for current distribution.

White perch (Morone americana) is a prohibited invasive species, which means it is unlawful (a misdemeanor) to possess, import, purchase, transport, or introduce this species except under a permit for disposal, control, research, or education.

White perch infestations cause recreational, economic and ecological damage—changing how residents and visitors use and enjoy Minnesota waters.

People spread white perch primarily through the improper use and disposal of live bait.

Report new occurrences of white perch to the DNR immediately by contacting your DNR Invasive Species Specialist or log in and submit a report through EDDMapS Midwest.

There is no known effective population control for white perch in natural water bodies at this time.