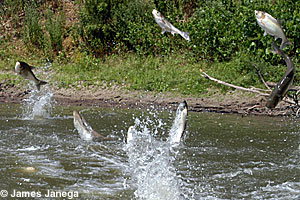 The silver carp is a large filter feeding fish that can weigh up to 90 pounds and grow to 50 inches. They are silver in color and can be greenish on their back. If startled by the sounds of watercraft, silver carp can jump up to 10 feet out of the water.

The average silver carp caught in Minnesota is 33 inches and 18 pounds. They have tiny scales on their body, and no scales on their heads. Their eyes are low-set below the mouth. They have large upturned mouths without barbels or teeth. There is a long keel that extends in front and behind the pelvic fins.

The silver carp is a filter feeding fish that becomes sexually mature between four and six years old. They spawn when water temperatures are between 62.5°F and 79°F, and require flowing water for reproduction.

Silver carp are native to eastern Asia. The species was imported from China to the United States during the early 1970s to help fish aquaculture operations and improve water quality in retention ponds/sewage lagoons. Large flood events allowed the species to escape into the Mississippi River, where they reproduced and established wild populations. They continue to spread through flood events and through migration within connected river systems.

The silver carp (Hypophthalmichthys molitrix) is a prohibited invasive species in Minnesota, which means it is unlawful (a misdemeanor) to possess, import, purchase, transport, or introduce this species except under a permit for disposal, control, research, or education.

Silver carp cause recreational, economic and ecological damage—changing how residents and visitors use and enjoy Minnesota waters.

People spread silver carp primarily through the improper use and disposal of live bait, as juveniles are difficult to distinguish from gizzard shad and other native baitfish. If introduced, they can spread on their own through connected waterways.

Report any occurrences of silver carp to the DNR immediately by taking a photo and making arrangements with the DNR to transport the carp to the nearest fisheries office.

To learn more about our recent efforts and about other invasive carp visit the Invasive Carp homepage.