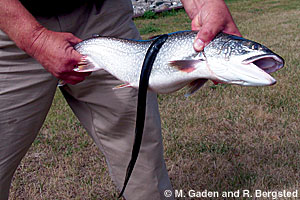 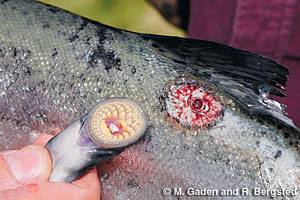 Sea lamprey are an eel-like fish that grow 12 to 20 inches long. Their tubular, scaleless body is mottled brown or black with a grayish belly. They do not have a jaw; instead they have a suction-cup like mouth that has teeth arranged in concentric circles. They are parasitic, attaching to host fishes in order to feed on their blood.

Young lamprey live in streams, feeding on algae and bottom debris. Adults are parasitic, seeking out, attaching to, and feeding on fish. Adults move into gravel areas of tributary streams during spring and early summer. They build nests and lay eggs before dying. The larvae spend four to six years in the stream, growing about six inches. They then transform into their parasitic phase and migrate into the open waters of the Great Lakes to feed on fishes for one to two years. The sea lamprey‘s life cycle, from egg to adult, averages about six years, and may last as long as 20 years.

Sea lampreys are native to the Atlantic Ocean, Lake Ontario and the St. Lawrence River. They spread into the other Great Lakes via canals that bypassed natural barriers. They were confirmed in Lake Erie in 1921, Lake Michigan in 1936, Lake Huron in 1937, and Lake Superior in 1938.

The sea lamprey (Petromyzon marinus) is a prohibited invasive species, which means it is unlawful (a misdemeanor) to possess, import, purchase, transport, or introduce this species except under a permit for disposal, control, research or education.

Sea lamprey infestations cause recreational, economic and ecological damage—changing how residents and visitors use and enjoy Minnesota waters.

Report new occurrences of sea lamprey to the DNR immediately by contacting your DNR Invasive Species Specialist or log in and submit a report through EDDMapS Midwest.

Barriers are designed to prevent the upstream movement of sea lampreys into tributary spawning areas.

Lampricides are used to kill the larval stage of the sea lamprey in tributary systems, leaving most other organisms unaffected at the concentrations applied.