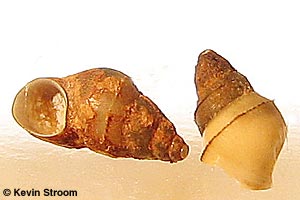 New Zealand mudsnails are small animals with a coiled spiral shell. They grow only one-eighth to one-fourth inches long and are grey to brown in color. The shell opening is on the right when the shell is pointed up. They have an operculum (”trapdoor”) covering the opening, which is missing when the snail is dead and the shell is empty. New Zealand mudsnails are difficult for non-specialists to conclusively identify.

The New Zealand mudsnail grazes on lake and river bottom material. Native populations consist of both males and females. However, all introduced populations in North America are clonal, consisting of genetically identical females that clone themselves and give birth to live young. They are typically found in cold stream systems where densities can reach 100,000 to 700,000 individuals per square yard.

The New Zealand mudsnail is native to New Zealand. The species was unintentionally introduced into the United States with imported rainbow trout in Idaho in the 1980s, as well as into the Great Lakes through the discharge of contaminated cargo ship ballast water. In Minnesota, they were confirmed in the St. Louis River downstream of the Fond du Lac dam and Lake Superior in 2007. Refer to EDDMapS Midwest for current distribution.

The New Zealand mudsnail (Potamopyrgus antipodarum) is a prohibited invasive species, which means it is unlawful (a misdemeanor) to possess, import, purchase, transport, or introduce this species except under a permit for disposal, control, research, or education.

People spread New Zealand mudsnails primarily through the movement of fishing gear, in particular felt-soled waders. Adults and young, which may be hidden in mud and debris, can stick to watercraft, anchors and ropes, as well as scuba, fishing and hunting gear. They can survive in water contained in bait buckets, live wells, bilge areas and other water-containing devices. Their operculum allows them to close their shells and survive out of water for multiple days.

It is recommended that hunters and stream anglers scrub their waders with a stiff brush to remove debris and avoid the use of felt-soled waders, since the felt can easily trap, and thus potentially transport, invasive species.

Report new occurrences of New Zealand mudsnails to the DNR immediately by contacting your DNR Invasive Species Specialist or log in and submit a report through EDDMapS Midwest.

There is no known effective population control for New Zealand mudsnails in natural water bodies at this time.