Common, or European, buckthorn, and glossy buckthorn are the two non-native, invasive buckthorn species found in Minnesota. These buckthorn species were first brought here from Europe as a popular hedging material. They became a nuisance plant, forming dense thickets in forests, yards, parks and roadsides. They crowd out native plants and displace the native shrubs and small trees in the mid-layer of the forest where many species of birds nest. Glossy buckthorn has been sold by the nursery trade in three different forms, so its appearance can vary. The cultivar Frangula alnus 'Columnaris' is narrow and tall; the cultivars Frangula alnus 'Asplenifolia' and 'Ron Williams' have narrow leaves that give them a fern-like texture. 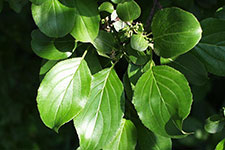 Appearance: Tall understory shrub or small tree up to 20' high with a spreading loosely branched crown, often multiple stems at the base. Brown bark with elongate silvery corky projections (Caution: native plums or cherries have a similar bark). Female and male plants.

Fruit: Clusters of black 1/4 inch fruit ripen on female plants in August and September. Seeds are viable for 2 - 3 years in the soil. Each berry has three to four seeds. 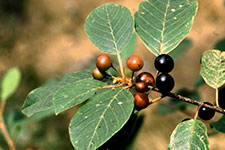 Appearance: Tall understory shrub or small tree, grows up to 20' high, has a spreading loosely branched crown, often multiple stems at the base. Brown bark with elongate silvery corky projections (Caution: native plums or cherries have a similar bark).

Branches: Buds and leaves are alternate. No thorn at tip of twig. Cut branch exposes yellow sapwood and orange heartwood.

Leaves: Alternate, think, and ovate or elliptic smooth, dark glossy, margins are not toothed. There are eight to nine pair of leaf veins. Leaves stay green late into fall.

Fruit: Ripens progressively from a distinctive red to a dark purple in August and September. Each berry has two to three seeds. Seeds are viable for two to three years in the soil.

Why is buckthorn such a problem?

Do you have one or two buckthorn trees or acres of buckthorn? Your situation can affect how you plan your treatments.