What to do if you encounter a black bear

Knowing how to behave when encountering bears and how rare bear attacks actually are can keep you safe and provide peace-of-mind. Although bears are large and powerful animals, a wild Minnesota black bear is normally shy and scared of people – even bears that are two to three times heavier than an average person. With a little preparation and knowledge, you can recreate in bear country with confidence. Learn how you can respond to a bear encounter, what to do if a bear becomes aggressive and how you can defend yourself with bear spray.

If the bear becomes defensive

Sometimes bears exhibit a quick burst of aggression to defend against a perceived threat. The closer you are to the bear when it becomes aware of your presence, the more likely it is to exhibit defensive behavior. This behavior is intended to intimidate and scare away the threat. It may pop its jaws, swat at the ground while blowing or snorting, and it may even bluff charge toward you. The bear is communicating to you that you are too close and it wants you to leave. This is not the time to argue with the bear.

If a bear approaches you

It is not normal behavior for a bear to come up to humans, especially in daylight. Typically, bears only do so because they seek food sources provided by humans. Very rarely, a bear may see a person as potential prey.

If a bear does approach you:

Defending yourself with bear spray

Bear spray containing capsaicin (hot pepper liquid) is a good option to change the behavior of bold bears. It also gives you peace-of-mind and can prevent a bear from attacking. It is available at most outdoors stores or online sporting goods retailers.

What to know about bear spray
How to use bear spray

Use bear spray either to scare away a bold bear or to deter a bear that is coming toward you.

This video from the Interagency Grizzly Bear Committee provides a quick demonstration of how to use bear spray. 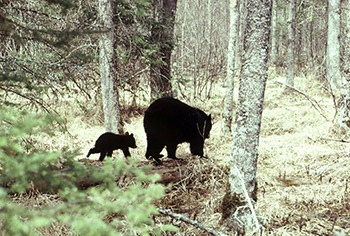 Our state has a healthy population of black bears, but while Minnesotans spend considerable time recreating in the wooded areas we share with them, most people have never seen a bear close up. This is because most bears flee quietly when they hear someone coming. Even among the thousands of encounters that have occurred, by hikers, campers, birders, berry-pickers, hunters and others, the experience is usually non-eventful. Attacks are very rare.