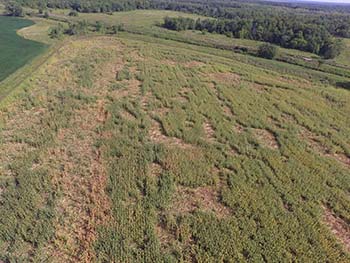 Aerial view of bear damage to a cornfield. 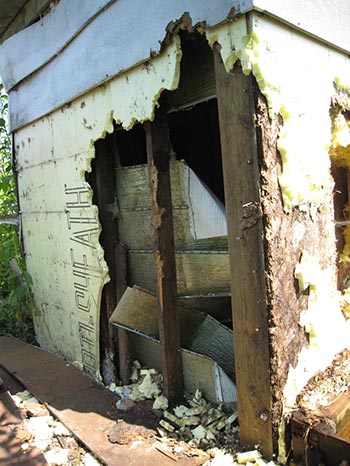 Bear damage to a garage. 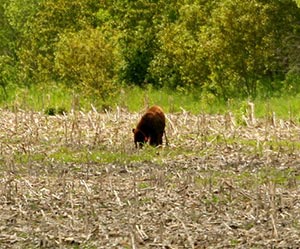 Sometimes a bear that causes problems must be killed. The DNR only kills bears when they have been determined to be a public safety threat; this happens on average fewer than six times per year.

Can I shoot a problem bear?

Homeowners and farmowners kill the majority of nuisance bears, which is allowed in state law. This option can only be used if the bear is causing significant property damage or creating an immediate danger to people or animals. (Destroying a bird feeder or unsecured trash cans is not a viable reason to shoot a bear.)

Before you shoot a bear, ask yourself if you have taken all of the necessary precautions to prevent the situation and if killing the animal is your only solution. Call your DNR Area Wildlife Manager to discuss the situation.

When a bear is shot by a property owner it should be reported as soon as possible to a conservation officer (DNR’s TIP Line, 800-652-9093, is available 24/7) so the meat can be salvaged. By law, it must be reported within 48 hours. The property owner may not keep the bear. Bears are the property of the State of Minnesota.

Why doesn’t the DNR just trap and move bears?

The DNR does not relocate problem bears. This practice ended in 2000 because trapping and moving bears does not resolve the underlying problem, which is the presence of attractive food sources provided by people. Removing and securing attractants is much more effective at reducing bear problems than trapping and moving bears. Moving a problem bear can cause problems elsewhere because the bear is forced to find food in a new area, and often the easiest source of food in a foreign environment for a bear is birdseed or trash.