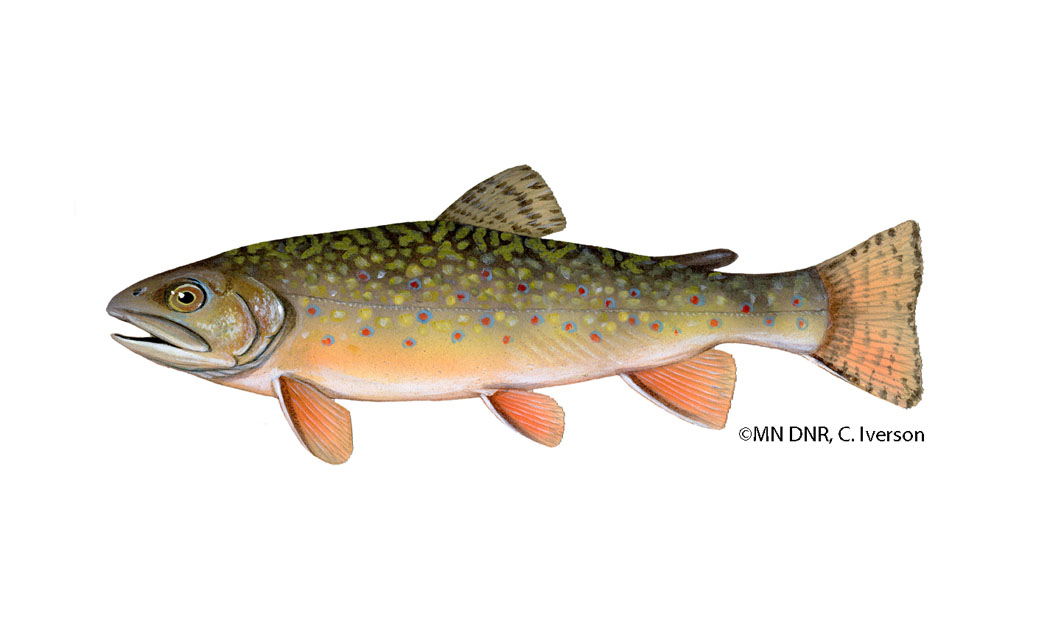 As their scientific name implies, brook trout are members of the salmon family that inhabit small spring-fed streams and spring ponds. They prefer cool and clear water with sandy and gravelly bottoms and moderate vegetation. In Minnesota, they are native to the headwaters and small streams of eastern Minnesota. Other common names for brook trout are: speckled trout, squaretail trout, coaster, and brookie.

Most trout streams are located in the southeastern part of the state and along the north shore of Lake Superior. The northern streams contain primarily brook trout, while the southeastern streams contain mostly browns and rainbows (both introduced species for sports fishing, see Piers & Places), with the native brook trout inhabiting the cold, clean headwaters. Lesson 1:5 Habitat Hideout can help teach youth how to “read the water” and find suitable habitat for trout.

The brook trout is a medium-sized (achieving lengths of 8 to 10 inches on average), dark fish with light spots, a black-spotted dorsal fin, and a squarish tail. Its scales are so tiny that it almost looks like it doesn’t have any. Male brook trout grow a hook-like protuberance on their lower lips in the fall. The brook trout has a light belly and sides. Its back is dark green to nearly black with light wavy lines and speckles. Some of its spots are red with blue rims.

To avoid damaging the trout’s protective slime coating, wet your hands before handling, and keep the fish in the water as much as possible as you remove the hook. Consider using barbless hooks to make hook removal easier. If the hook is swallowed, simply cut the line and release the fish immediately.

Young brook trout eat small aquatic and terrestrial invertebrates such as mayfly and damselfly larvae, flying insects, water beetles, snails, worms and many others. They have a reputation for having a voracious appetite. Larger brook trout also feed on minnows and other small fishes.

Most brook trout achieve sexual maturity in their first year of life; typically living for 3 to 4 years. Spawning season is approximately October and November. In streams, brook trout spawn in gravelly riffles that are spring-fed. The female thrashes above the gravel bottom to hollow out a concave nest (called a “redd”). The male defends the area while the female creates the nest. Once the nest is complete, the male and female simultaneously release eggs and sperm into the nest, and then cover the fertilized eggs with the surrounding gravel.

The nest location must be carefully chosen so the water flow from the spring seeps through the gravel keeping the eggs clean and oxygenated. Eggs hatch 2 to 5 months later (depending on water temperatures – cooler water makes for slower development). Brook trout continue to live after spawning and spawn each year of their adult life.

Because few fish-eating (piscivorous) fish live in their habitat, brook trout have few natural predators. Where they coexist, small brook trout may be eaten by larger brown trout. Aside from humans, however, brook trout are most likely to be eaten by herons, snapping turtles and river otters. One of the biggest threats to the long-term survival of brook trout populations continues to be water quality and temperature. They are highly susceptible to stream degradation and climate change, including low oxygen levels due to sediments from run off and warm waters.

Search out small headwater streams in southeastern Minnesota, North Shore creeks in the north, or lakes stocked with brook trout. Use small flies and very small spinners or jigs. Lesson 5:6 Fool Fish with Flies is a good introductory lesson about tackle used for trout fishing. Brook trout are aggressive eaters, and are relatively easy to catch. As such, they are vulnerable to overfishing. The season for brook trout generally runs from April 18 to September 30, and possession limit is generally 5 (not more than one over 16 inches). Specific possession limits vary with time of year, in southeastern Minnesota. As always, it is a good idea to consult a current fishing regulations book to know your limit to protect the fish populations. Lesson 4:1 Fishing Regulations and Sportsmanship can be adapted to focus on trout stream regulations. Also, don’t forget your Trout Stamp & fishing license.

Trout can be prepared and cooked in countless different ways according to your taste.