Q. What is the Off-Highway Vehicle Damage Account?
A. First authorized in 2003, the Off-Highway Vehicle (OHV) Damage Account makes funds available to repair or restore damage to property resulting from the operation of OHVs. Certain conditions must be met before a claim can be approved. The DNR Division of Trails & Waterways administers the program out its Area Offices located in cities and towns all across Minnesota.

Q. What conditions apply to damage claims filed with the OHV Damage Account?
A. MN Statutes Ch. 84.780 stipulates that damage claims may not be approved unless:

Q. Who can file a claim?
A. Any property owner, public or private, or their designated representative, can file a claim under the program. Work cannot be conducted without the permission of the affected property owner(s). Federal, state, county, local and municipal government agencies, including DNR, are also eligible to apply for reimbursement.

Q. What constitutes damage?
A. Examples of OHV damage include erosion, loss of topsoil, soil compaction or rutting, or damage to trees, shrubs or other living vegetation. Associated property damage, such as trampled fences, is also eligible for reimbursement. The bottom line is that if a Conservation Officer or local Sheriff would write a ticket for it, it's damage.

Q. What is an "unpermitted location?"
A. A site where the operation of OHVs is illegal or otherwise prohibited.

Q. Can account funds be used for driveway or ditch maintenance?
A. Typically no, because ditch riding is generally permitted along County and Township roads in Minnesota. Should damage occur outside the legally-defined riding zone, or if private property trespass is involved, damage may be eligible for reimbursement under the program. 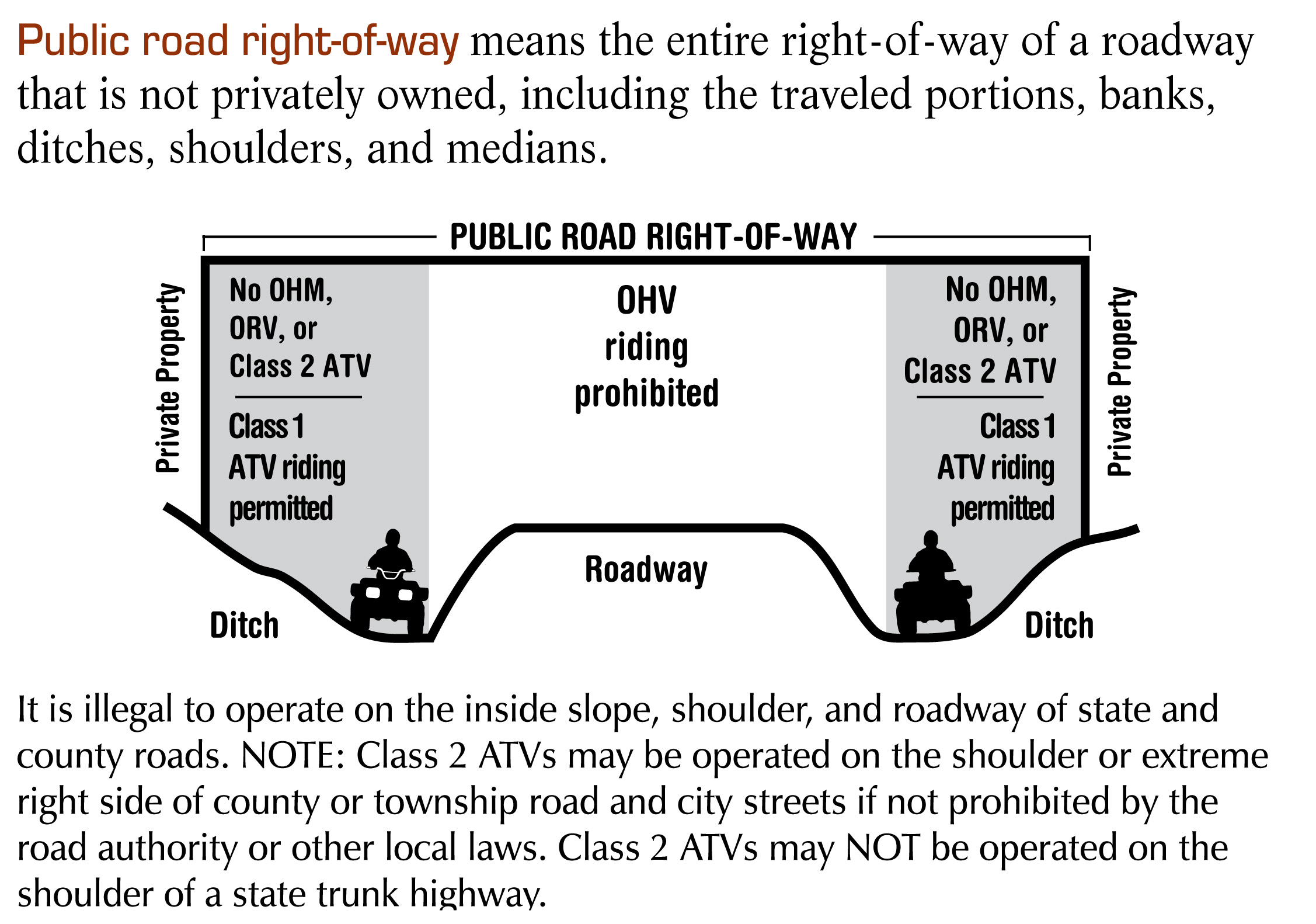 Q. Specifically, which costs or expenses are reimbursable?
A. All direct damage repair costs are eligible for reimbursement. Preventative costs (e.g., signing, gating, new fencing or added enforcement) are not reimbursable under the program. Likewise, road or trail re-routes, upgrades or other improvements, are ineligible for reimbursement. Administrative time spent (by public agencies) repairing damage may also be reimbursable, but not time spent investigating the claim, or prosecuting parties responsible for the damage.

Q. What about damage done before August 1, 2003?
A. Damage that occurred prior to August 1, 2003 is ineligible for reimbursement. The Legislature established this date to exclude claims for historical or pre-existing damage.

Q. What "reasonable efforts" must be taken in order to identify the party responsible for the damage? To obtain restitution?
A. Applicants must make an effort to identify who caused the damage. Reasonable efforts may include, but are not limited to: reporting a vehicle description or license number, or the names and addresses of persons involved (if known); filing police reports and keeping records of any arrests, citations or restitution orders if issued. When dealing with a minor, documentation of contacts with parents or guardians are strongly recommended.

If the responsible party can be identified, applicants must make an effort to seek restitution for damage repairs and restoration. Reasonable efforts to obtain payment might include correspondence, personal contacts, court transcripts or copies of civil judgments or proceedings. Taking legal action to recover unpaid or overdue court-ordered restitution is also strongly recommended.

Q. How is damage-related restitution considered in making claims?
A. Damage-related restitution, whether resulting from criminal or civil proceedings, or as negotiated between the property owner and responsible party, should be collected and used to repair damages before seeking reimbursement from the OHV Damage Account. Taking legal action to recover unpaid or overdue court-ordered restitution is also strongly recommended. However, if restitution is delayed, denied or is otherwise insufficient to repair or restore damages, interim and/or supplemental claims will be considered.

Q. How are claims considered? Can a denied claim be appealed?
A. All claims will be evaluated on a case-by-case basis according to the conditions established by law. Claims may be denied, in whole or in part, when: 1) Required conditions have not been met, 2) When supporting documentation is judged insufficient, or 3) When ineligible costs or expenses are submitted for reimbursement. Applicants are encouraged to provide all relevant background materials and supporting information when submitting a claim.

Ineligible or unfounded claims will be formally denied in writing. Partial denials for ineligible components of larger claims will be discussed with claimants upon review of the claim. All denials may be appealed to the DNR Regional Director with cause. In the case of contested appeals, a final eligibility determination will be made and communicated in writing by the DNR Commissioner.

Q. What are "reasonable efforts" to prevent reoccurrence of the damage?
A. Reasonable efforts to prevent recurrence may include signing; obstructing; gating; or fencing where appropriate. Neighbors and adjacent landowners should also be notified. If minors are involved, documented contacts with parents or guardians are recommended. Remember, costs incurred in undertaking preventative measures to deter future damage are not reimbursable under the program.

Q. Who does the repair work?
A. If the required conditions are met, a site inspection will follow, and mitigation measures will be identified. With the property owner's consent, repair work will be authorized and funded. The DNR will either contract for damage repair work, or DNR crews may undertake the repairs themselves with state work crews and state-owned equipment. Claimants may even choose to make repairs themselves. The DNR will inspect completed repairs and the property-owner will be asked to approve the work done.

Q. What does "repair" or "restore" mean?
A. This means bringing the property reasonably close to its original, pre-damaged condition. It does not include upgrades, improvements, road or trail re-routes, vegetative plantings, or new signing, gating or fencing that did not previously exist. The DNR will determine the extent to which some sensitive natural resources, like naturally-occurring wetlands, have been damaged, and whether these resources can or should be repaired.

Q. Are there monetary limits placed on damage claims?
A. No monetary limit has been placed on individual claims. Claims will be processed until appropriated funds are exhausted.