If you see a toad, it's most likely an American toad, the most common toad in Minnesota. This toad is often seen in or around wetlands during the spring mating season. At other time of the year it can be found far from water even in backyards and gardens in the city.

Sounds: A long, drawn-out, high-pitched, musical trill lasting up to 30 seconds. The male's vocal sac is round when inflated.

Identification: Skin coloration is typically brown or reddish. One or two warts are present in each of the large dark blotches on their back. The white chest usually has dark speckles. The parotid gland is typically separated from the cranial ridge.

Females lay up to 20,000 eggs which normally hatch within one week. Large schools of tiny, black tadpoles feed together along the edge of shallow wetlands, emerging as a mass of tiny toads within approximately six weeks. Maturity occurs in two to three years.

Few animals eat toads because of their skin tastes bitter. However, hognose snakes eat American toads and raccoons eat the undersides of toads, avoiding the distasteful skin on the toad's head and back. 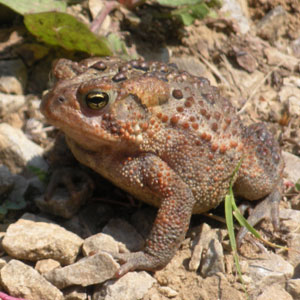 Summer habitat: While this species is most often associated with forest and woodland habitat, it also occupies grasslands, residential yards, and gardens.