About the same size but more sharply marked than the widespread American toad, the Great Plains toad can be found along Minnesota's western border.

General description: Cranial ridges form a V, spreading apart from the snout. Parotid glands are smaller than those of the American and Canadian toads.

Color: Skin coloration is gray, brown, or greenish. It has large blotches which have a strongly contrasting white border. The blotches contain several small warts. The chest is white with no speckles. 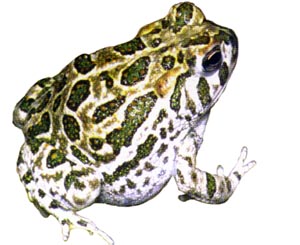 Great Plains toads gather in spring and summer in shallow water, including temporary pools, after rainstorms. A single female may lay up to 20,000 eggs. The eggs hatch in two days. Metamorphosis occurs about six to seven weeks later. During periods of drought, they may not breed.

The Great Plains toad is a farmer's friend because it eats cutworms and other crop pests. It also will eat earthworms and a variety of insects. It mainly hunts at night.

Toads are an important part of the diet of hognose snakes. Raccoons and skunks also feed on them occasionally, but they will take care to avoid the toad's distasteful glands.

Great Plains toads live in damp areas in open grasslands and farm fields. They dig burrows, back end first. In Minnesota, they are found only in the western part of the state.

Breeding habitat: Breeding activity is triggered by warm, heavy rains. Large numbers of toads may gather to breed in shallow temporary wetlands, flooded fields, or backwaters of streams and ditches.

Summer habitat: An accomplished burrower, this species may hide underground during the day or for extended periods of extreme heat or drought. Prefers wide open spaces, occupying grasslands and agricultural fields of western Minnesota.

The Great Plains toad does not have special status in Minnesota, which means its population is likely doing fine.

When threatened, the Great Plains toad takes a deep breath and puffs itself up so it looks bigger than it really is. A good burrower, it heads underground in heat and drought. In winter it digs all the way down to beneath the frost line.