The bullfrog is named for its deep call, which sounds like a bull roaring.

General description: This is the largest North American frog. No dorsolateral fold is present.

Color: Green skin coloration with yellow throat in males and white in females.

Sounds: A resonant series of deep bass notes sounding like rrr-uum or jug-o-rum. 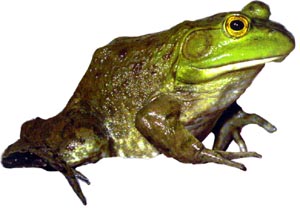 Bullfrogs begin to breed in wetlands, ponds, and shallow lakes between age four and eight. They breed later in the year than many other frogs. A female bullfrog may lay 2,000 to 25,000 eggs on the surface of the water after mating. It takes two years for bullfrog tadpoles to develop legs and emerge from the water and three additional years to reach maturity.

Fish, birds and some mammals eat bullfrogs. Some humans hunt them for their tasty legs.

Summer habitat: This highly aquatic frog prefers large bodies of water such as lakes, ponds, sluggish streams, and backwaters of rivers. Although introduced local populations occur in several counties in central and southern Minnesota, this species is only native to the southeastern corner of the state.

Formerly bullfrogs were found only in the southeastern corner of Minnesota. In the past, people have tried to establish bullfrog populations in other parts of the state.

The bullfrog provides the majority of the frog legs for gourmet restaurants. While under water, bullfrogs close their nostrils and continue to "breathe" through their skin.