The leopard frog is called that because it is spotted, like a leopard. This was once the most widespread frog species in North America. But since the 1960s, its population here and throughout the United States has declined.

General description: The leopard frog is a green or brown frog that has dark spots on its back and legs. Dorsolateral folds are present.

Leopard frogs don't mate until age two to three. In late April, male frogs begin calling to attract females. Females can lay more than 6,000 eggs which may vary from submerged egg masses in northern populations to a surface film of eggs in southern populations. The black eggs are attached to aquatic vegetation. By early August, the young frogs leave the water to feed on land. 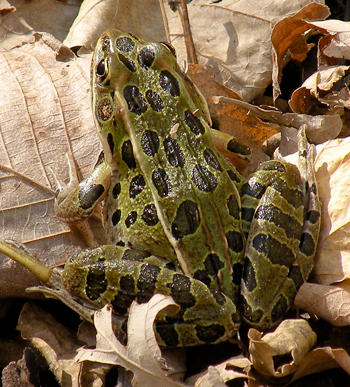 Leopard frogs live in wet meadows and open fields near wetlands throughout the state. In the fall, they move to the bottoms of lakes and ponds, where they spend the winter.

Summer habitat: A frog frequently found in grasslands, wet meadows, and forest edges. During the summer they may travel one to two miles from water.

Minnesota's leopard frog has been on a steady decline since the 1960s. Red-leg disease, pollution, pesticides and the loss of wetlands and other habitat are the main reasons. Leopard frogs are harvested for bait and for use in biology laboratories.

Leopard frogs are familiar frogs to middle and high school biology students. These frogs are often found in biology books and laboratories. Some of Minnesota's leopard frogs have no spots. They are called Burnsi leopard frogs.