What does the Connectivity score show? 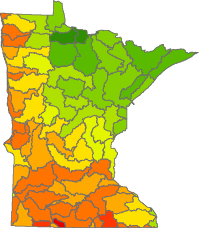 The three connectivity index values were combined into one mean (average) connectivity score for each watershed. Comparing the mean (average) score reveals statewide trends in system health. Although it may mask any extreme values in any one index, it serves to illustrate an overall gradient in results by basin and region. The mean can also be used to compare watersheds, such as watersheds that are upstream or downstream within the same basin.

The free movement of energy, matter and organisms throughout our watersheds is restricted in many ways. The watersheds in the south, southwest and northwest regions of Minnesota have low scores in all three connectivity areas. In these regions, there is very limited terrestrial habitat with few natural areas to connect what does remain due to very extensive agricultural production. There is also a high density of bridges, culverts and dams; and the riparian areas are often unvegetated. The watersheds along the Mississippi River in the southeast fare slightly better. This is likely due to the steep topography that restricts urban and farm development. The winding valleys hold some intact corridors of terrestrial habitat. However, these same valleys often hold streams that have been crossed many times with bridges and culverts leading to low aquatic connectivity scores.

The Terrestrial Habitat Connectivity model will be refined as the terrestrial habitat model is updated with newer land cover data and additional parameters.

The Riparian Connectivity model could be enhanced by delineating the contributing riparian area, rather than calculating land use within a standard buffer width.

The Aquatic Connectivity model could be refined with more detailed information about structures in streams so that structures could be weighted according to their detrimental effect on aquatic connectivity.