The information and resources on this webpage are designed to help woodland landowners in south-central Minnesota. The Oak Savanna subsection spans 1,819,571 acres in all or parts of Dakota, Dodge, Fillmore, Freeborn, Goodhue, Le Sueur, Mower, Olmsted, Rice, Steele, and Waseca counties. 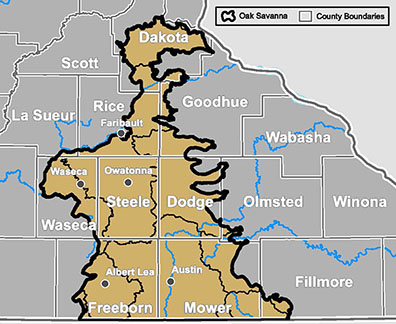 South-central Minnesota is home to a multitude of wildlife species, including some that are rare, declining, or threatened. The DNR refers to these as species in greatest conservation need. About 350 species are given this classification in Minnesota. Examples from the Oak Savanna include Swainson's hawks, red‑headed woodpeckers, bobolinks, sandhill cranes, wood and Blanding's turtles, Ozark minnows, and redfin shiners.

The list of plants for this area is exhausting. From small flowers, to ferns, to towering pines, naming them all is impossible! Getting familiar with the common native trees in your area is a great way to start.

Wood lot Tree Planting and Care learn about native landscaping, what trees to plant, where to find native tree stock, and what to know before you plant. Find the right tree for your property.

Invasive species are plants, animals, and insects that are not native to Minnesota and cause economic or environmental harm or harm to human health. You can do many things to reduce invasive species on your land.

The area covered in this handbook encompasses approximately 1.8 million acres, which consists largely of gently rolling hills. Oak savanna existed where the prairies from the west met the forests. Bur oak savanna was the primary vegetative community, but areas of tallgrass prairie and maple‑basswood forests were also common. Tallgrass prairie was concentrated on level to gently rolling portions of the landscape, mostly in the center of the subsection. Bur oak savanna developed on rolling moraine ridges on the western edge and in areas cut by rivers at the eastern edge. Maple‑basswood forest was restricted to portions of the landscape with the greatest fire protection—either on steep ravines or where stream orientation reduce fire frequency or severity.

Historically, fire was the most important disturbance to the landscape and maintained oak openings rather than forests. Over thousands of years, the landscape changed from prairie to forest. Trees and shrubs moved into the grassland. Periodically, fires swept through, killing back woody plants and allowing fire‑adapted grasses and wildflowers to grow. Over time, trees and shrubs moved back until another wildfire swept through.

Several medium‑size rivers flow through this subsection, including the Zumbro, Straight, and Cedar. Wetlands were once plentiful throughout, and along with shallow lakes, provided critical habitat for a variety of wildlife. Few lakes are present and can be found in the moraines that form the western edge of the subsection.

Today, most of this area is farmed. Increased intensity of agricultural production has led to further wetland deterioration and loss, water‑quality concerns, and sediment loading in streams. Residential and other encroaching land development from the Twin Cities is accelerating in the northern part of this area.

While northern Minnesota is in the coniferous forest biome), we use the Ecological Classification System (ECS) to focus landscape information on a more local level. The ECS divides the landscape into progressively smaller areas based on similarities and differences in climate, geology, natural features, and plants. This webpage focuses on the Oak Savanna subsection, which contain a mix of deciduous and coniferous trees.

A detailed plan created by the DNR for forests in northern Minnesota to help land managers put their land in context with state land management goals for the area. In addition, the Minnesota Forest Resources Council has created southeast landscape plan to guide any landowners toward common management goals for sustainable forests, clean water, productive forests, and healthy wildlife habitat. 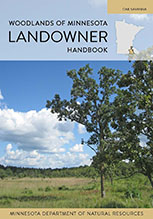 Woodlands of Minnesota Handbook - Oak Savanna is both a reference and workbook. It contains information on the past and present condition of land in the regions, insight into some of the biggest challenges woodland owners face here, and tips for making and accomplishing goals for your woods.