During the late months of summer, gelatinous balls of various size are commonly seen in ponds and streams in Minnesota. These balls are usually attached to objects such as dock pilings or rocks.

What folks are likely seeing are colonies of bryozoans, says DNR aquatic invertebrate biologist Gary Montz. These microscopic animals, sometimes referred to as moss animals, make jellylike tubes and attach themselves to sticks, rocks, and other submerged objects. They connect their tubes together into colonies that can be as big as a volleyball. The animals themselves live in the tubes and extend their tentacles out to capture even smaller microscopic organisms for food.

Bryozoan colony attached to a rock in the Baudette River 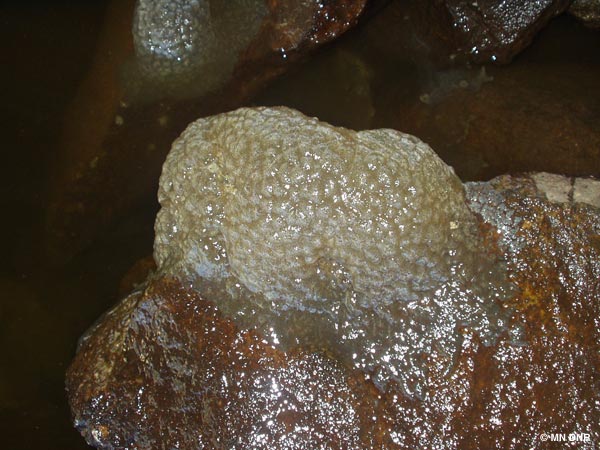 Each fall the bryozoans begin to die off, but create overwintering "eggs" that will form new colonies the next year. When the colony is dying, gas produced by decomposition may cause it to float loose, sending gelatinous globs floating down the river.

Montz says bryozoans are quite common in many Minnesota waters, ranging from large rivers to lakes to small ponds. They are not toxic, venomous, or harmful. They don't really seem to cause problems for people, except for the "ick" factor and occasionally clogging underwater screens or pipes.

"Just another of the really strange life forms that are in our waters that most people don't even know exist," Montz says.

Bryozoan colony attached to a rock in the Baudette River 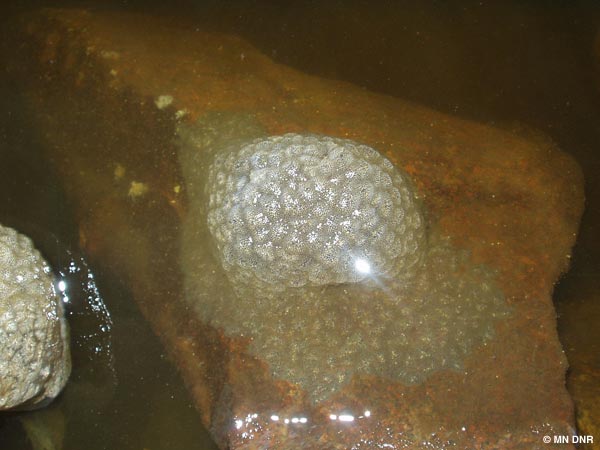 For more information on Bryozoans, visit the following sites:

For more information on Bryozoans: