Lake of the Woods/Rainy River Sturgeon

Lake Sturgeon splashing in a net 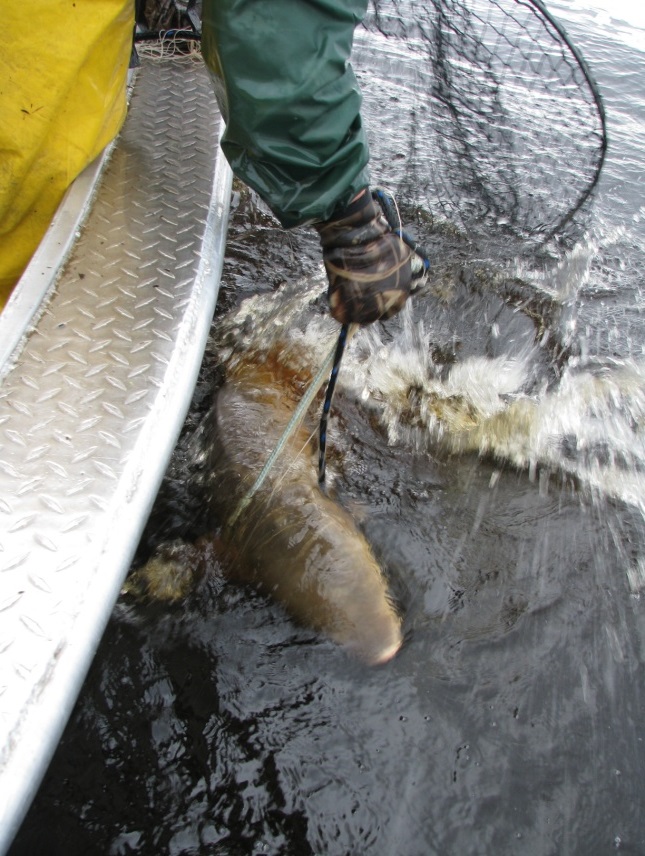 To monitor how the population is recovering, estimates for the number of sturgeon longer than 40 inches in the Lake of the Woods - Rainy River system were made in 1990 and again in 2004. During this period, the sturgeon population grew from about 16,000 individuals to about 60,000 individuals.

This year, the Minnesota Department of Natural Resources, Ontario Ministry of Natural Resources and the Rainy River First Nation are co-operating on another sturgeon population estimate. The goal of the project is to once again estimate the number of sturgeon longer than 40 inches in the Lake of the Woods - Rainy River system, and to describe the size structure of the population.

Preparing to measure a Lake Sturgeon 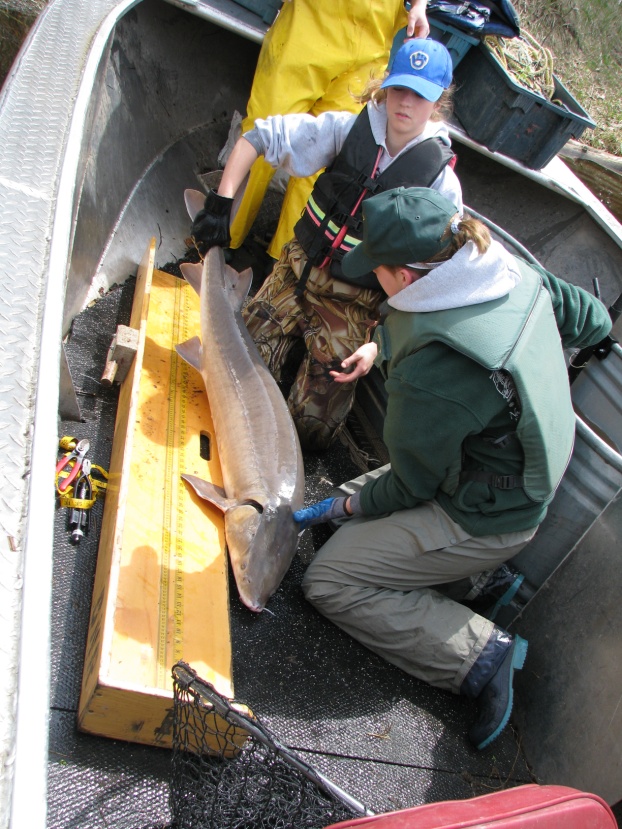 The population estimate is made by tagging a large number of sturgeon, allowing them to disperse and mix with untagged sturgeon, then recapturing the tagged fish. The ratio of tagged to untagged fish, during the recapture period, is used to estimate the population size.

To catch fish to tag, we well set gill nets in the Rainy River and Fourmile Bay of Lake of the Woods. We will also tag fish caught by anglers when fishing is good, and there are a lot of anglers fishing in close proximity. This ‘tagging' portion of the survey will take place from ice-out until late May. 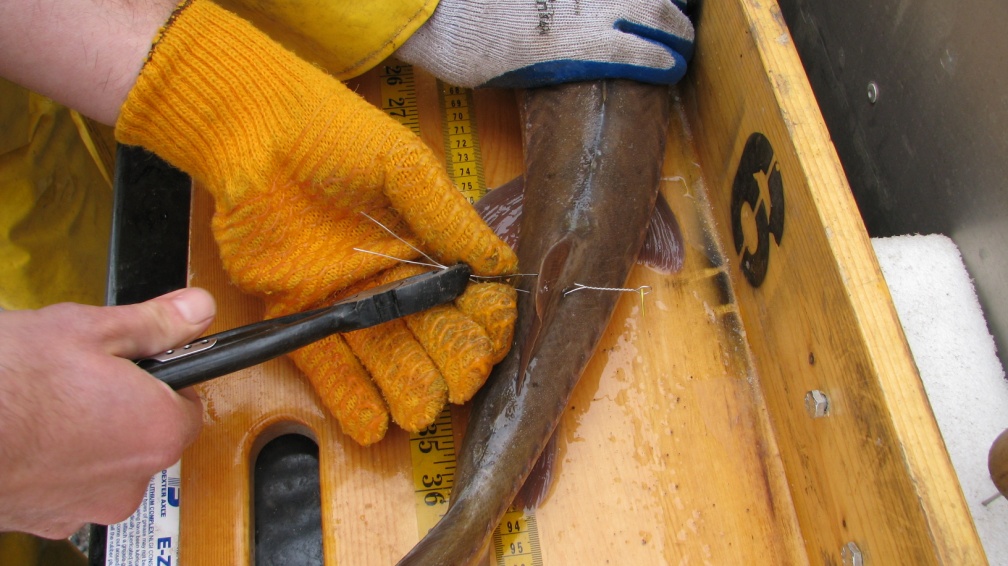 From mid-June until the end of July we will be using gill nets to recapture the sturgeon which were tagged earlier. The nets will be set throughout Fourmile Bay, the Rainy River, and in the Minnesota and Ontario waters of Lake of the Woods.

A disc tag on a Lake Sturgeon 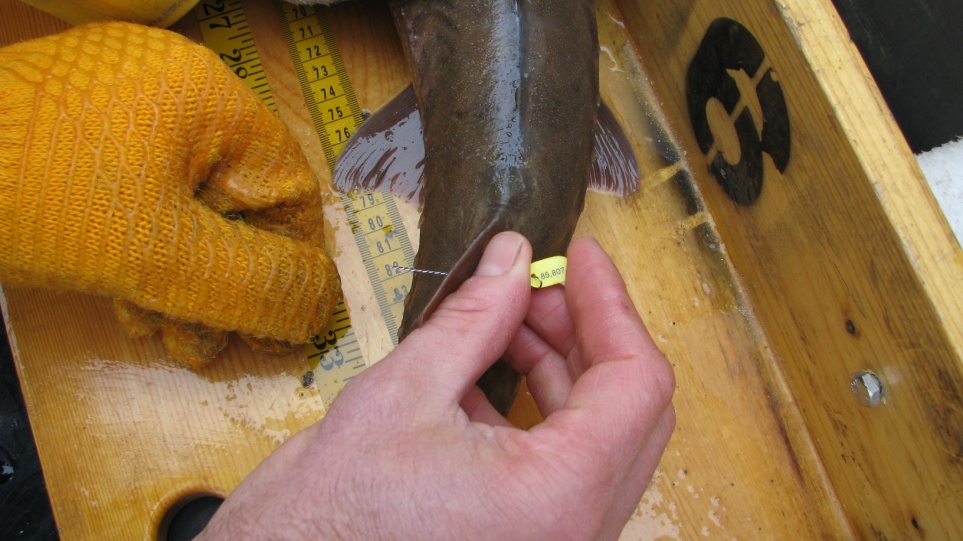 The size of the mesh used in the gill nets, for both the tagging and recapture periods, is too large to catch any species other than sturgeon. We will not be recapturing sturgeon during August, because water temperature is too warm, and the sturgeon would experience some mortality in the gill nets.

Can you help? Anglers have been an important component in sturgeon management activities for over 10 years. During the 2004 population estimate, more than one half of the tagged sturgeon were donated by anglers fishing in Fourmile Bay and the Rainy River. If you happen to be fishing in an area where a tagging crew is working, please consider donating any sturgeon you are planning to release to be tagged. Do not hold for, or transport sturgeon to, the fisheries crew. Let them come to you. It is illegal for anglers to hold on to sturgeon longer than the immediate catch and release time frame. Should the fisheries crew not see you catch the fish, try to get their attention. If they are not there promptly, or have not communicated directions to you, release the sturgeon immediately.

Large Lake Sturgeon after being tagged 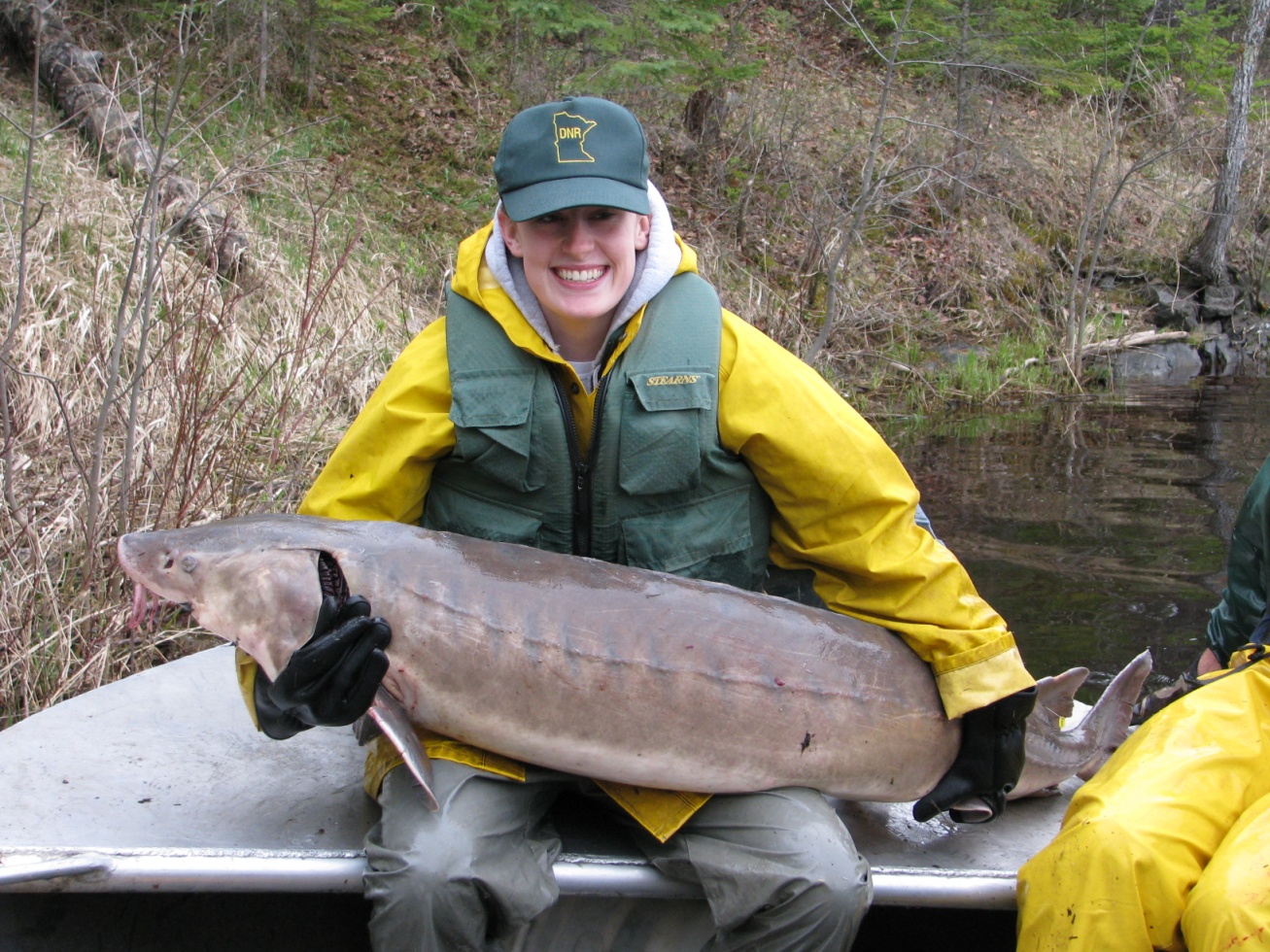 In addition to donating sturgeon, anglers are asked to keep a sharp look-out when travelling through Fourmile Bay. Fourmile Bay is very shallow, and nets set in the bay are vulnerable to being run over by boats, and destroyed. The ends of the nets will be marked with flags, and a series of buoys will be distributed along the net between the flags. Please don't travel between the flags! The nets are very expensive, and in limited supply.

Lake Sturgeon being released after she was tagged 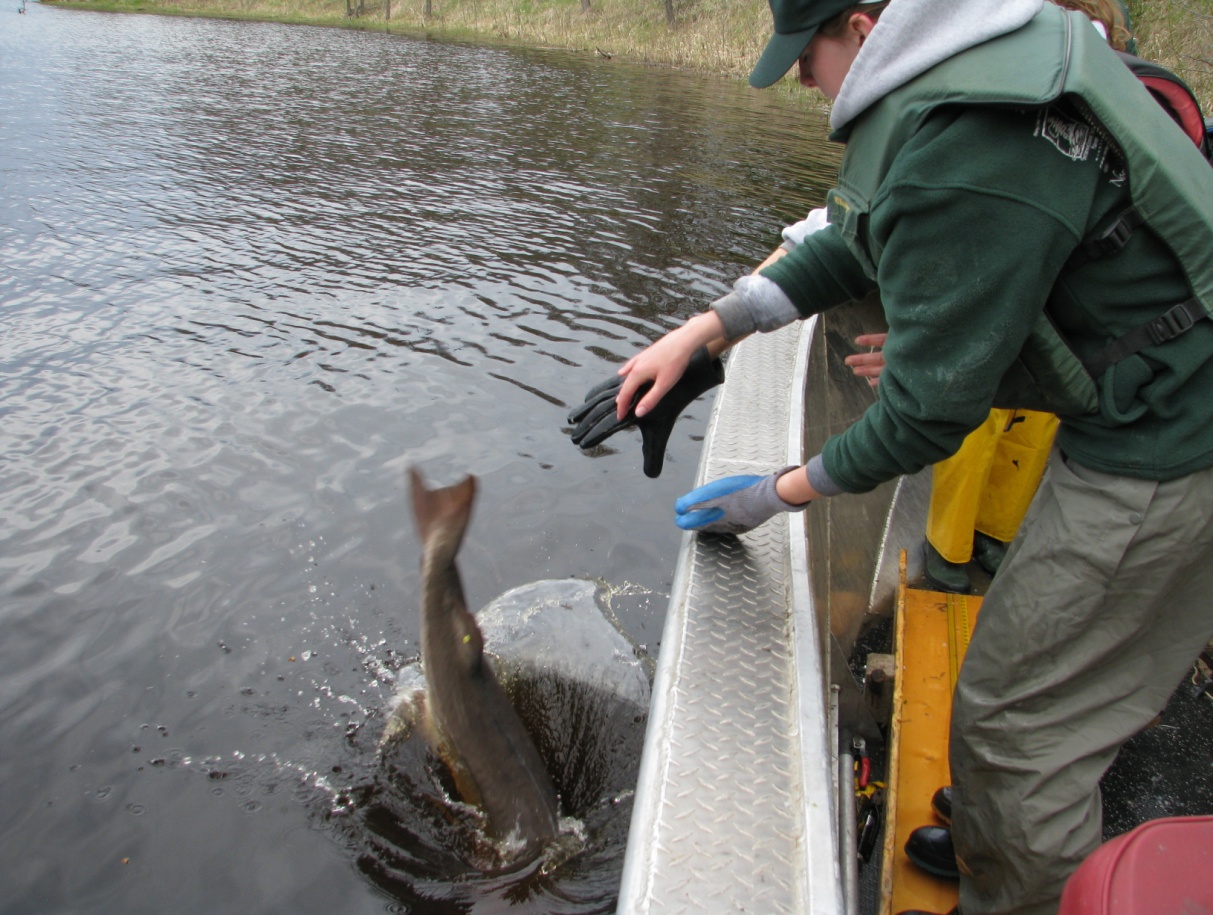 Finally, anglers have been very helpful by reporting information on tagged sturgeon they catch. Information we would like reported includes the tag number, where the fish was caught, whether the fish was kept or released, and the approximate length of the fish. Anglers can report tagged fish information at the online tag reporting page of the MN-DNR web site, or they can call the Baudette Area Fisheries office at (218) 634-2522. In return, anglers will receive the tagging and recapture history of the fish.