Lake of the Woods assessment work during July and August is focused on sampling young-of-the-year (YOY) walleye and sauger. YOY fish are that portion of a population that was hatched in the current year. This life stage is sampled because the collected data allow us to describe how abundant the year class will be. Perhaps of greater importance than the ability to predict year class strength is the identification of the factors that determine year class strength.

During July, YOY walleye are sampled using beach seines. A seine is simply a long (100 foot) fine-mesh net that is dragged in an arc on the lakeshore. Any fish that are in the path of the net are captured. The captured fish are counted, by species, and the length and weight of a sample of each species is recorded. In a typical year, walleye grow from a length of 40 mm (1.6 inches) to about 75 mm (3 inches) during July.

Beach seining on Lake of the Woods in July 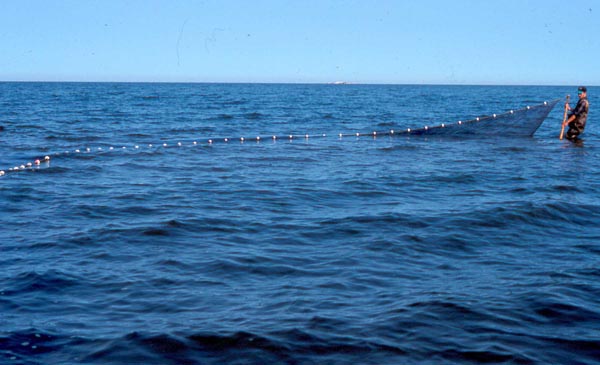 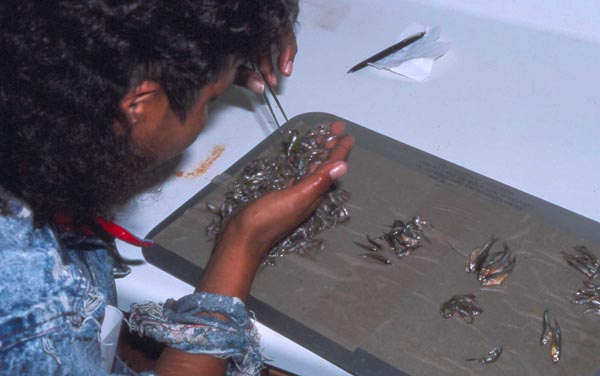 Beach seines are very effective at sampling fish that live in shallow near-shore areas. However, as the YOY walleye grow they start to move into deeper water that beach seines cannot sample. Also, sauger are a very important species on Lake of the Woods that is not vulnerable to beach seines due to the deep water that they prefer. In order to continue to sample walleye later in the summer, and to sample sauger, trawls are used to capture these species in August.

A trawl is a funnel-shaped net that is dragged through the water behind a boat. The net is weighted so that it sinks on the bottom of the lake, and is equipped with "doors" that spread the mouth of the net. As the trawl is pulled across the lake bottom it scoops up fish in it's path. As with seining, all captured fish are counted and have length and weight recorded.

Trawling on Lake of the Woods in August 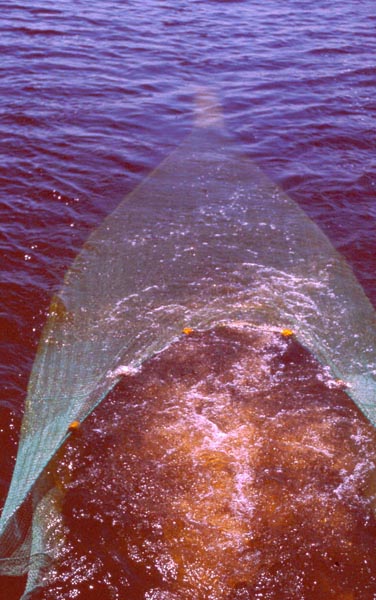 On Lake of the Woods the length that walleye achieve during their first summer, and their abundance, determine how strong a year class will be. By the middle of August, walleye lengths can range from 60 mm (2.4 inches) to 130 mm (5.1 inches), and abundance has ranged from 1 to 32 per hour of trawling. Generally, large walleye survive the winter better than small walleye, and high numbers of YOY walleye translate into high numbers of older walleye. Year classes of moderate strength can be produced when a large number of small YOY walleye are present, or a small number of large YOY walleye.

Five-inch walleye and 2.5 inch sauger caught in trawl in August 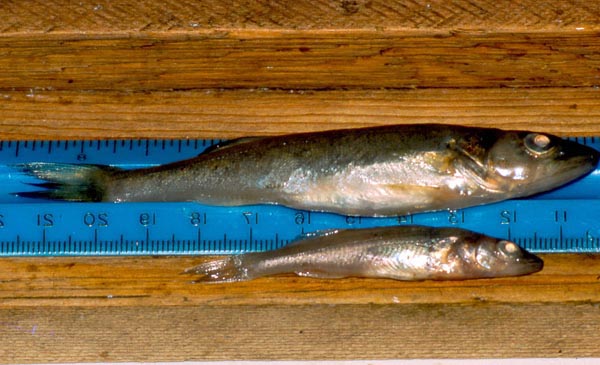 For more information on the Lake of the Woods fishery, contact area fisheries supervisor Phil Talmage at [email protected].