When most anglers reflect on fishing Lake of the Woods, or the Rainy River, they are thinking walleye. More than any of the other species managed in the Lake of the Woods - Rainy River system, walleye drive the local tourism-based economy. Because of its importance, we spend a lot of our time monitoring the walleye population to make sure that it remains healthy and can support the amount of harvest placed on it.

Walleyes that were sampled by electrofishing in the Rainy River 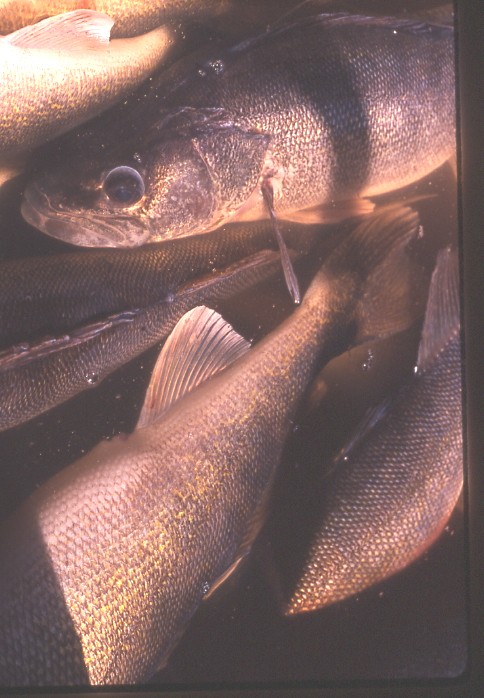 In 1982, a large number of walleye were tagged in the Long Sault Rapids, near Birchdale, MN, in order to determine where these fish spend their time. The tagging study found that the walleye using this spawning area are primarily residents of Lake of the Woods, and only enter the Rainy River to spawn. More than 80% of the tag returns received were sent in by anglers that caught their tagged fish in the Minnesota portion of Lake of the Woods. Most of the rest of the tag returns came from the Ontario portion of the lake. Since walleye from the Long Sault spawning stock spend much of their lives in portions of the lake that receive a lot of angling pressure, it is likely that this stock of walleye is the most intensively fished walleye stock on the Minnesota portion of the lake.

Fisheries researchers have found that the most sensitive indicator of over-harvest in a fish population is when the oldest, largest, individuals disappear from the population. If the walleye population of Lake of the Woods would become over-harvested, the first stock in which signs of over-harvest would show is the stock that spawns in the Long Sault. In order to monitor this segment of the walleye population, the spawning run that uses the Long Sault Rapids, is sampled every spring using electrofishing gear. Typically, this annual sampling occurs during the last two weeks of April.

Dipping a stunned walleye in the Rainy River 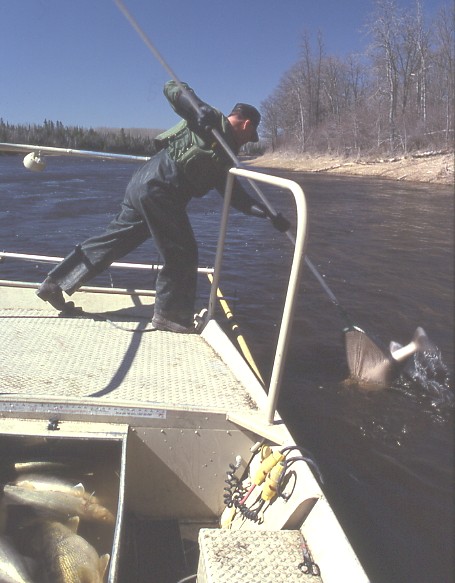 Electrofishing is a sampling technique that uses electric current in the water to stun fish. Major advantages to electrofishing are that a large number of fish can be collected very quickly, and these fish experience low mortality. Of the 800 to 1,000 walleye that we sample every spring, we have found that 3 to 5 die due to injuries caused by being electrofished.

The technique we use, when sampling the Long Sault, is to drift the boat over suspected spawning and staging areas throughout the rapids. A generator, producing over 1,000 volts, is used to set up an electric field around the boat. When a walleye enters the edge of the electric field, the pulsing current forces it to swim towards the boat. As the fish gets closer, the increasing current density stuns it, and it is removed from the water with a long-handled dip net. The walleye is placed into a live well, where it recovers. It is released after length and sex are recorded.

Female walleye that was sampled by electrofishing in the Rainy River 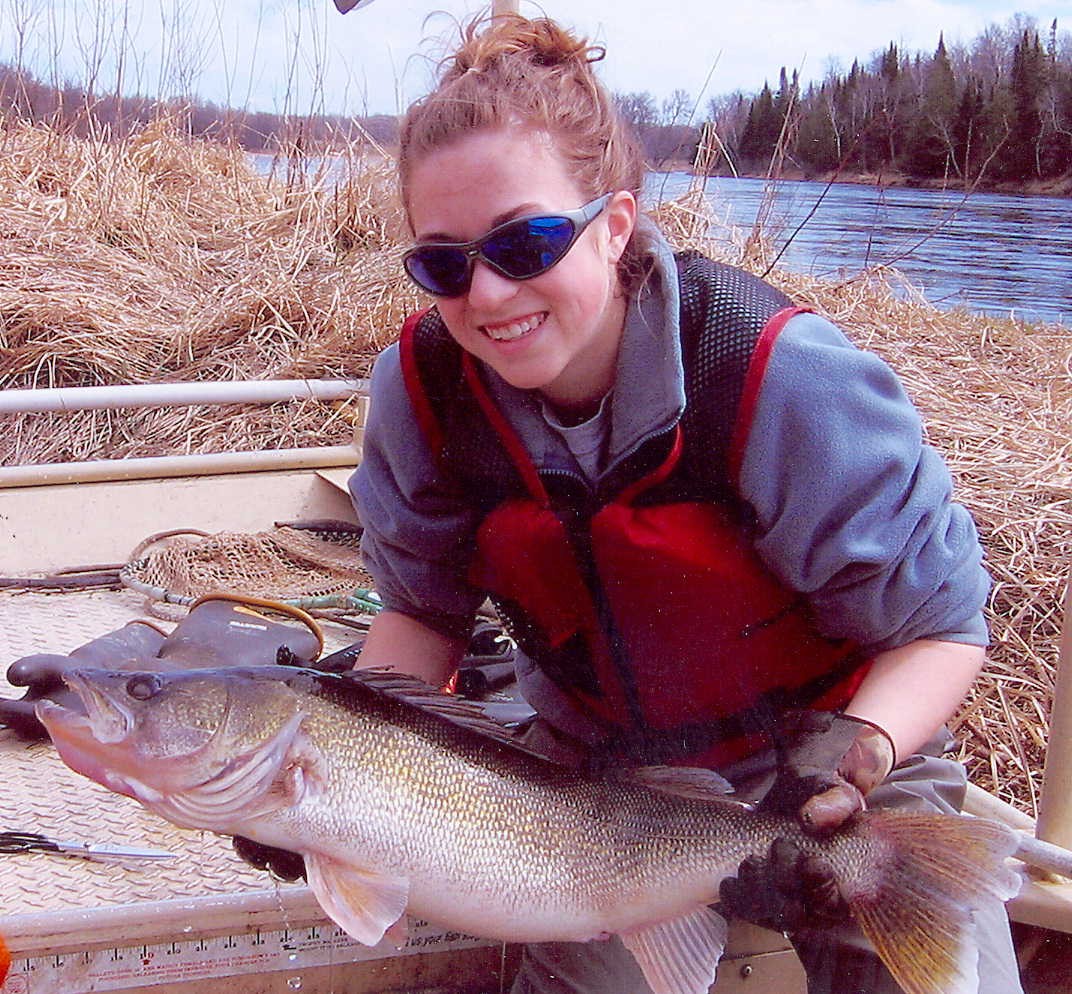 The walleye population has changed a lot since the first electrofishing survey was conducted in 1982. The largest individuals in the population have always ranged around 32 inches long, but in 1982 most of the females, which are the walleye that can get truly large, were less than 20 inches long. Recent surveys find that most females are more than 25 inches long. Based on the information collected through electrofishing, we feel that the walleye population in Lake of the Woods is very healthy, and can support current levels of harvest. The 32-inch long walleye we sample are of course females, and are in the range of 20 years old. The longest male walleye we typically sample are perhaps 24 or 25 inches long.