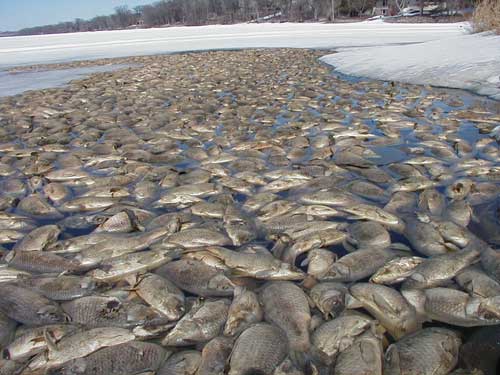 Winterkill is a term used to describe the loss of fish in winter because oxygen was lacking in a waterbody. Submerged vegetation and algae create oxygen through the process of photosynthesis. During the winter, oxygen production is often reduced because ice and snow on the lake limit the amount of sunlight reaching vegetation. In small, shallow lakes the available oxygen can quickly be used up by live plants that consume oxygen in the evening, fish, and by bacteria that feed on dead and decaying vegetation. When the oxygen level declines, less tolerant fish species, and fish in poor condition overall, can begin to suffocate.

Winterkill is a natural process and not all results are detrimental. In lakes with high numbers of carp for example, periodic winterkill can thin out their numbers. In lakes that support gamefish, the fish population can rebound quite dramatically in years following winterkill. While some area lakes have installed aeration systems to reduce the possibility of winterkill, others are managed as "boom or bust" fisheries, at times providing some of the hottest fishing action in our area. In our walleye production ponds, stocking fry following winterkill generally results in better fingerling production and can occasionally produce great fishing.

Some species of fish are more vulnerable to winterkill than others. Trout require the most oxygen and start to stress at oxygen levels below 5 ppm. Bluegill and largemouth bass also are moderately sensitive to lowered oxygen levels. Walleye, yellow perch, northern pike, carp and crappie species have intermediate tolerances down to about 2 ppm, while bullheads and fathead minnows are the most tolerant of low oxygen. Winterkills seldom result in the death of all fish in a lake. Lakes with regular winterkill events are usually dominated by bullhead species.

Dissolved oxygen monitoring during the winter and trap net assessments after ice-out help us identify which lakes experienced winterkill.