Occasionally, we do survey work on lakes and streams or have recent events that may not show up on the main DNR webpage, or may only show up in our files in Sauk Rapids. Below are a few pieces of the information that we have compiled over the past few years that we thought might be of interest to anglers as well as lake property owners. Please feel free to contact any one of our staff in Sauk Rapids if you have further questions. 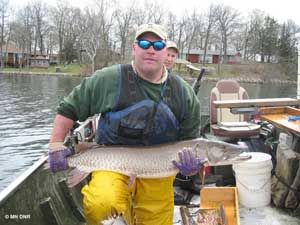 Sugar Lake is a highly developed, 1,015-acre recreational lake located five miles north of Maple Lake, MN in Wright County. In 1967 Sugar Lake was designated for muskellunge management. Sugar Lake was chosen as a muskellunge lake because of its large size and good water clarity. The fast growing Mississippi Strain of muskellunge fingerlings had been stocked annually from 1989 to 2004. Since then stocking has been reduced to ever other year.

Sometimes muskellunge are the victims of controversy and Sugar Lake was no exception. So, we conducted creel surveys in 1984 and 1998. Over the years, one of the biggest changes was the number of anglers seeking muskellunge. Twenty-nine percent of angling parties sought muskellunge in 1998 vs only three percent in 1984. During the 1998 survey, lake residents were asked - "Do you support muskellunge management?" 68% indicated support (87 of 140 respondents). 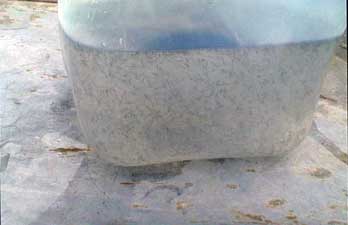 Buffalo Lake is located within the city limit of Buffalo, MN, in Wright County. Buffalo Lake is hypereutrophic, windswept, does not stratify in the summer, and does not winterkill. Until 1980, Buffalo Lake received the wastewater effluent from the municipal treatment plant. Partly because of this, the lake experiences large nuisance algal blooms. In recent years however, the lake has been showing signs of restoring itself.

The history of walleye stocking in Buffalo Lake dates back to the 1940's. During the early 1980's walleye fingerlings were stocked at a rate of one pound per littoral (area < 15' in depth) acre every other year. Then in 1984, fry stocking was tried (1,000 fry/littoral acre). Walleye fry are small fish that are just hatched and are about the size of mosquito larvae. The 1988 assessment showed stocking to be successful and the lake has been stocked with fry exclusively ever since. The management strategy is to stock walleye fry every other year.

In the four surveys conducted since 1988, the gill net catch has been above the third quartile value (6.3/gill net) for similar lakes. A creel survey conducted in 2002-2003 estimated that 8,244 adult walleye were harvested, making it the top producer in the state compared to similar lakes.

The reason the DNR stocks walleye is that there is little natural reproduction of this species in south central Minnesota. This may be due to lack of suitable spawning habitat, competition or predation by other species or other factors. Walleye may try to spawn, but few fry survive.

The advantage of stocking fry is that it is cheaper and often produces a stronger year-class whereas, fingerling stocking is more expensive, are sometimes not available, and usually only produce weak to moderate year-classes. Comparing costs: 1,500 lbs of fingerlings @20/lb would cost $10,000; and 1.5 million fry would cost $1,500. Some other examples of successful fry stocking are Cedar Island and Horseshoe Lakes in Stearns County and Clearwater Lake in Wright and Stearns Counties. 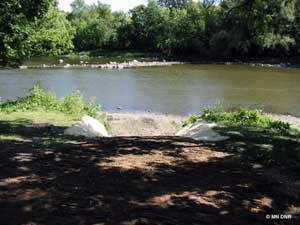 Minnesota's warm water rivers are underutilized in terms of recreation and angling. Part of the reason may be that it is often difficult to obtain access. But access to the North Fork of the Crow River just got easier when the DNR construction crew improved several sites on property owned by Wright County.

The fishery of the North Fork of the Crow River is typical of fisheries in southern Minnesota's warm water rivers. Shorthead redhorse were the most abundant fish in the most recent survey. However, game fish such as channel catfish, smallmouth bass, walleye, bluegill, and northern pike are all present in fishable numbers.

In 2001, the fisheries construction crew based out of Detroit Lakes improved the access at three sites: Riverside Park (pictured above), Crow Springs County Park, and Betty Mason Wayside. The steep grade of the riverbanks was cut back, the approach was graveled, and streamside vegetation was restored.

There are nine access sites to the North Fork of the Crow River and since it is one of Minnesota's water trails, photos of all the access sites, map locators, and description of canoeing and fishing opportunities can be found under Crow River Access Guide.

Luxemburg creek is a cold-water stream that was designated as a trout stream in 1951. Its headwater is located approximately 1.5 miles southwest of Luxemburg, MN, in Stearns County and flows approximately six miles to the confluence with Johnson Creek.

Since the initial survey in 1949, the stream has been noted for its natural reproduction of brown trout. Anglers occasionally report brown trout up to 24 inches. That is a big fish for a small stream that averages 10 feet in width.

The DNR acquired its first easements along a 1,400-foot area within the residential development known as Cherrywood Estates and creek Side Addition. Additional easements between the mouth and the lower end of the existing easement were acquired in 2004.

In the summer if 2001, root wads were placed at 30o angles facing upstream along four bends in the creek to stabilize the bank, minimize stream velocity, and offer overhead cover. The most positive results occurred in 2006 when it was discovered that the catch of brown trout was substantially higher than in previous years. A total of 84 brown trout between four and 16 inches were sampled. The complete report as well as reports from other trout stream in our area and access maps can be found at the following link Stream Surveys.