Click on thumbnails of photos below to see larger images and descriptions. 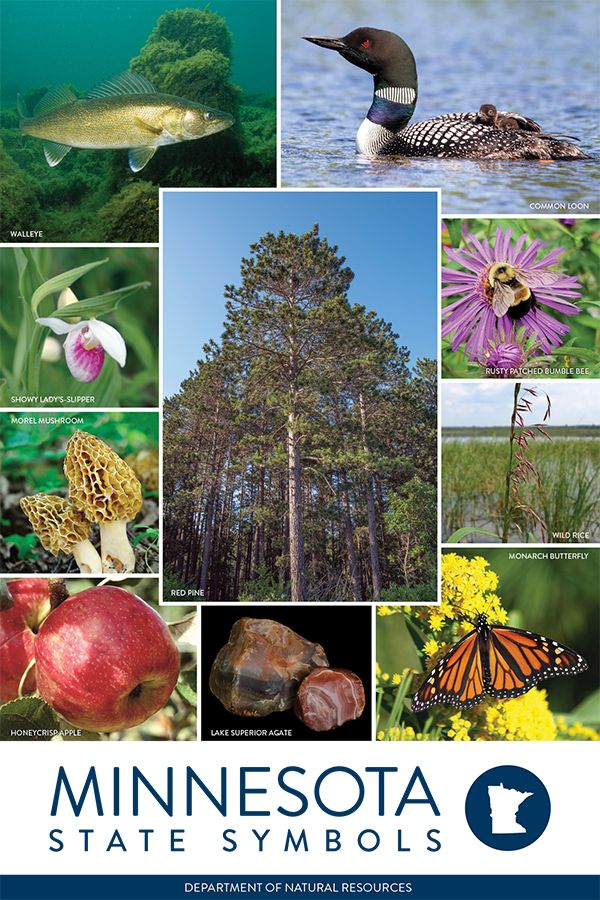 The Lake Superior agate was named the official gemstone in 1969. It is a quartz mineral called chalcedony with varying red, brown, gray, and white bands. It was formed more than a billion years ago by fluids pulsing through porous volcanic rock in the region that is now Lake Superior. These gemstones were dispersed when glaciers tore at the rock and moved across Minnesota. You can find them on beaches and in gravel pits in the northeast to northcentral part of the state.

It is popular to polish agates to a high sheen, accentuating their bands, especially for making jewelry.

The monarch (Danaus plexippus) became the state butterfly in 2000. Every fall monarchs migrate great distances along the Mississippi River, all the way to central Mexico. Monarchs west of the Rocky Mountains migrate to California. Millions swarm in small areas and completely cover trees.

Monarchs mate in late winter and begin heading north again in March. Females lay eggs on milkweed plants along the way, then die. The larvae feed on the milkweed plant and absorb a substance that is distasteful to predators. Young butterflies continue migrating north to their parents’ origin.

Wild rice (Zizania aquatica) or manomin, a unique resource in Minnesota, was adopted as the official state grain in 1977. A staple food of the Ojibwe for centuries, it has cultural and economic significance. Minnesota produces over half of the world’s hand harvested wild rice—Canada produces the rest. Wild rice occurs naturally in shallow lakes and streams and ripens in late August or early September. The grain is harvested traditionally from canoes by bending the plant over the boat and lightly raking it with a hand-held wooden flail. Some wild rice is grown commercially in flooded fields. At the end of the growing season the field is drained and the grain is harvested mechanically.

The morel (Morchella esculenta) became the state mushroom in 1984. It is a highly desirable, edible mushroom sought after by mushroom hunters. Morels have an unusual, sponge like appearance and are sometimes called “sponge mushrooms.” Morels live in and on the edge of deciduous forests and grow above ground during spring and early summer.

The red pine (Pinus resinosa) was chosen the official state tree in 1953 to recognize its important role in Minnesota’s history, economy, and environment. Some of the tallest red pines in Minnesota are located in Itasca State Park. Many are over 120 feet tall and more than 300 years old.

The red pine has a straight trunk, reddish-brown bark, and needles 4 to 6 inches long, growing in pairs. It is usually bare of branches for two-thirds of the way up the trunk, with a rounded top or “crown.”

The showy lady’s-slipper(Cypripedium reginae) was adopted as the state flower in 1902. The lady’s-slipper is a member of the orchid family and classified as a perennial herb. Its habitat is swamps, fens, bogs, and damp woods. This rare wildflower grows slowly, taking 4 to 16 years to produce its first flower. It may live as long as 50 years. The showy lady’s-slipper blooms in late June and early July. Since 1925 this wildflower has been protected by state law, making it illegal to pick or collect them.

The common loon (Gavia immer), also known as the “great northern diver,” was chosen Minnesota’s state bird in 1961. The loon is a large black and white bird with deep green-tinted feathers and dark red eyes. It has a wingspan of up to 5 feet and body length of up to 3 feet. The loon is an excellent swimmer and diver and can fly at high speeds. Its loud, haunting call is easily identified over Minnesota lakes in the summer. In the winter it flies to warmer ocean water on the Atlantic and Pacific coasts.

The Honeycrisp apple (Malus pumila cultivar Honeycrisp) became Minnesota’s state fruit in 2006 thanks to petitioning from students at Anderson Elementary School in Bayport, Minnesota. This apple was developed by the University of Minnesota’s apple breeding program in 1960 and released in 1991. Ever since, this exceptionally crisp and juicy fruit is consistently ranked as one of the highest quality apples due to its sweetness, firmness, and tartness. Honeycrisp apple trees are hardy and able to survive normal Minnesota winters.

The walleye (Stizostedion v. vitreum) became the state fish in 1965. Due to their elusive behavior and quality of fillets, walleyes are the most popular fish to catch in Minnesota. They average 1 to 2 pounds but can grow as large as 18 pounds. The name walleye comes from its pearly eyes—caused by a reflective layer of pigment that helps them see at night or in murky waters. They range in color from dark olive brown to yellowish gold. They prefer clean, windswept lakes in northern Minnesota.

The rusty patched bumble bee (Bombus affinis) became the state bee in 2019. Rusty patched bumble bees are social bees that live in colonies. Each colony lives for one year with queens emerging from hibernation in the spring, building a nest, and laying eggs. Workers forage on pollen and nectar from a variety of plants throughout the summer. In the late summer, the colony produces new queens that mate with males and then overwinter by themselves, beginning the cycle again the following spring. No longer found in much of its historic range, this bumble bee is now federally protected.