Story of a Seed

In the fall, a ripe acorn falls from a tall white oak tree. A squirrel might find and eat this nut, or seed. Or the acorn might grow into a new oak tree.

The story of this seed began early in the spring when frogs were croaking in the pond and birds were building nests. At the tips of the twigs of a tall white oak tree, tiny leaves were growing. On some twigs, tiny reddish-green pistillate flowers formed. These flowers contained ovules, which are like eggs—the female flower's contribution to the seed. 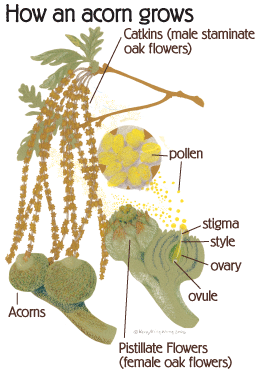 On some twigs, yellow flowers shaped like caterpillars developed. These catkins, or staminate flowers, produced dust like particles called pollen, the male contribution.

The male flowers released pollen into the air. Pollen grains went everywhere! One landed on a stigma atop a female flower. A long tube grew from the pollen grain down into a tubelike part (style) of the female flower and all the way down to the ovary.

Next, the pollen grain released two sperm into the tube. One sperm combined with the ovule, or egg, in the ovary. The fertilized egg cell divided to make an embryo.

What happened to the other sperm? It combined with parts of the female flower to make endosperm—food for the tiny new oak.

The ovary formed the round part of the acorn. Other flower parts formed the cap. All summer the acorn grew. At first it was green, then it turned brown and tumbled from the oak.

If a squirrel doesn't eat it, the acorn could sprout, put down roots, and grow into a new oak tree. After 50 years or so, that oak will grow acorns. Perhaps your grandchildren will see some of those new acorns.