The interactive map is provided as a way to explore the GIS data that was created by the Underground Mine Mapping Project. The interactive map allows the user to overlay underground features and ownership information on a variety of base maps and aerial photos. It also allows the user to query detailed information about underground features and links to the source map from which the features were derived and in some cases links to animated 3D models of the underground workings. 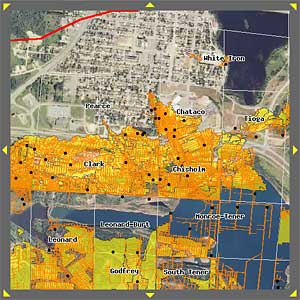 Some steps were taken with the data to make it suitable for web display. The data from the source maps was based on a variety of vertical datums. For the purposes of this interactive map all vertical datums were standardized to feet above sea level. Lake Superior datums ranged from approximately 581 to 615 feet above sea level. All of the different Lake Superior datums were converted to sea level by adding 602 feet. In the query results these datums are denoted as Computed Sea Level. Please keep in mind that elevation data for features whose vertical datum is Computed Sea Level may differ by up to + or - 21 feet from the represented elevation.

The user of this GIS product is advised that the extent of underground workings mapped and the notation of underground features are only as good as the maps that were found. All attempts were made to find the most recent maps available for each mine and mine level, while checking against earlier maps to ensure that all areas were included. There are mines within the study area for which no map or only incomplete maps have been found to date.

Mined extents should be viewed with some degree of skepticism for the following reasons:

The Minnesota Department of Natural Resources makes no representation or warranties, express or implied, with respect to the use of data provided herewith, regardless of its format or the means of its transmission. There is no guarantee or representation to the user as to the accuracy, currency, suitability, or reliability of this data for any purpose. The user accepts the data 'as is', and assumes all risks associated with its use. By accepting this data, the user agrees not to transmit this data or provide access to it or any part of it to another party unless the user shall include with the data a copy of this disclaimer. The Minnesota Department of Natural Resources assumes no responsibility for actual or consequential damage incurred as a result of any user's reliance on this data.