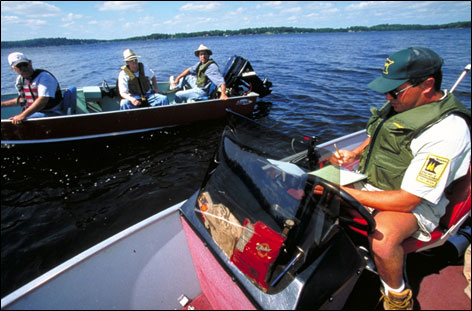 To keep track of walleye and all fish species caught, DNR relies on its creel, or angler survey, to monitor fishing on Mille Lacs Lake.

Monitoring by clerks stationed around the lake begins Dec. 1 and continues throughout the winter and summer fishing seasons.

Even when walleye angling is catch-and-release, some walleye die after being caught and released, a condition called hooking mortality. Based on angler reports to creel clerks, the poundage of walleye and northern pike that die from hooking mortality is calculated and applied against the state's harvest allocation.

Read more about the Mille Lacs creel survey, how it got started and the data that is collected and compiled to help manage the fishery.

In 1837, the federal government established a treaty with two Minnesota and six Wisconsin Ojibwe bands. The bands ceded lands in Minnesota and Wisconsin; but retained their rights to hunt, fish and gather within the ceded area. These rights were reaffirmed in Circuit and Supreme Court decisions through the 1990’s. Mille Lacs Lake is located within the 1837 treaty ceded area.

There are currently five species of fish (Walleye, Yellow Perch, Northern Pike, Cisco, and Burbot) in Mille Lacs Lake that are jointly managed between the State and the Bands. Protocols, which were entered into the court record, guide the process used to estimate annual Safe Harvest Levels (SHL) for each of these species. The SHL is the mutually agreed upon amount of fish that can be harvested from Mille Lacs each year, and is ultimately divided between the State and the Bbands into separate allocations. The State and the Bands must manage their fisheries to stay within their allocations.

Annual year-round creels have occurred on Mille Lacs since the early 1980s. The major purpose of the creel survey is to monitor the State’s recreational fish harvest to ensure the State remains within their agreed upon share of the allocations. Additionally, the creel surveys obtain information about the recreational fishery, which aids in making important management decisions. The State’s management goal for the fisheries associated with Mille Lacs is to maintain healthy, self-sustaining populations that support recreation and, when allocation is sufficient, harvest.

Finally, the State is legally prohibited from interfering with how the band’s allocation of the safe harvest level is regulated unless there is a public safety, public health, or conservation concern. Likewise, the bands cannot determine how the State’s allocation is regulated, but can seek redress from the courts if the State’s management actions unduly interfere with tribal harvest and/or gathering.

What does a creel survey clerk do?

The data used to make harvest estimates are collected by Creel Survey Clerks. Since keeping a creel clerk stationed at each of the 38 access sites on Mille Lacs Lake would be prohibitively expensive, we have to collect data from a sub-sample of the sites. The techniques used to sub-sample the access sites are commonly used all across North America when conducting creel surveys.

On each day, creel clerks are randomly assigned to work at one of the eight groups of access sites. Within each of those groups, hourly visits to the various access sites are randomly assigned. During the summer, a clerk is at one of the 38 access sites from 7:30 a.m. to 10:30 p.m. every day. While at a creel station, the main job of the creel clerks is to count the number of returning fishing boats each hour. The number of returning boats forms the basis for all of the estimates made through the survey.

The next most important task for the creel clerks is to talk with returning anglers about their trip that day. During the interview, the clerks determine whether a boat was fishing or not. Boats that were not fishing, as well as boats that were not done fishing for the day, are not counted. For each interview, data are collected on the quantityhow many and what size of fish were caught, and if the fish were harvested or released. If any fish were harvested, the creel clerk will ask to measure them so that we can obtain their lengths. Since the creel clerk cannot measure the released fish, we rely on the angler’s recollection of their catch. OtherAlso, recorded information includesare the number of anglers in the boat, and the amount of time spent fishing.

On Mille Lacs Lake, we have to generate an estimate of how many fish are harvested and released approximately every two weeks through the summer. This is done to monitor progress to the State’s allocation of the safe harvest level, and to ensure the allocation is not exceeded.

Another important estimate made during a creel survey is angler pressure (a measure of the amount of angling). Angler pressure is measured in anglers hours (one angler fishing in a boat for 1 hour generates 1 angler hour, two anglers fishing together in a boat for 2 hours are 4 angler hours, etc.). It is important to measure angler pressure so that we have an understanding of how much use the lake gets, and how time and management actions change that use. Through the interview we know how many anglers were on a boat, and how long the fishing trip was. By multiplying the number of anglers by the length of the fishing trip, we calculate the angler hours per trip. The average number of angler hours per trip is then generated. Again, this average is multiplied by the number of returning boats in a two-week period for an estimate of how many angler hours were expended during that period.

To summarize, the reality is that creel estimates are mainly just multiplying different averages together. The type of creel survey conducted on Mille Lacs Lake is of the same type used across Minnesota and North America. Research has determined that this type of creel survey provides accurate estimates of harvest and pressure. Those studies found the key to achieving accuracy was by obtaining high enough sample sizes and not introducing sampling bias. Each year, our creel clerks make contact with approximately 1,500 fishing parties in the summer, which is a large sample size. We protect against the concern of introducing bias into our results by the random nature of the creel scheduling. The location of where the creel clerks are assigned each day throughout the season is determined prior to the season opener in a random manner. For any scheduled shift, a creel clerk may be assigned to a set of accesses where inclement weather prevents anglers from fishing in that part of the lake on that specific day, or just as likely, they may be scheduled for a portion of the lake where the conditions are ideal. Fortunately, the highs balance out the lows because everything gets averaged in the end.

The number or weight of fish that die due to the stress of being captured and then released by recreational anglers is known as hooking mortality. Hooking mortality was a well-established occurrence prior to being calculated for the Mille Lacs Lake Walleye fishery. Due to its importance in the Mille Lacs fishery, (fish that die due to hooking mortality are included in the State’s allocation of the safe harvest level) two major research projects have occurred on Mille Lacs to further refine the way in which it is calculated.

The major finding of all Walleye hooking mortality studies is that the rate of Walleye hooking mortality varies by water temperature, with fish caught at higher water temperatures experiencing a higher rate of hooking mortality. Since the estimate of hooking mortality is entirely based on the number and size of fish that anglers report to the creel clerk, it is vital that anglers accurately report the number and size of the fish that were released. Reporting too many released fish, or forgetting about the small fish, would both contribute to an overestimate of hooking mortality. Toward that end, we have been observing an increase in interviewed anglers that are recording their catch when fishing Mille Lacs. Some anglers continue to use paper records; however, we are starting to see anglers using smartphone apps and have even run across a few anglers using mechanical clickers to keep track of the number of Walleye they caught and released..