Mille Lacs Lake management at work for you

Fisheries management activities on Mille Lacs Lake is the key way the DNR collects information to help make management decisions that create, maintain and sustain fish populations and angling opportunities. Click a topic below to learn more about the work of Mille Lacs Lake fisheries biologists.

How many walleye are in Mille Lacs Lake? 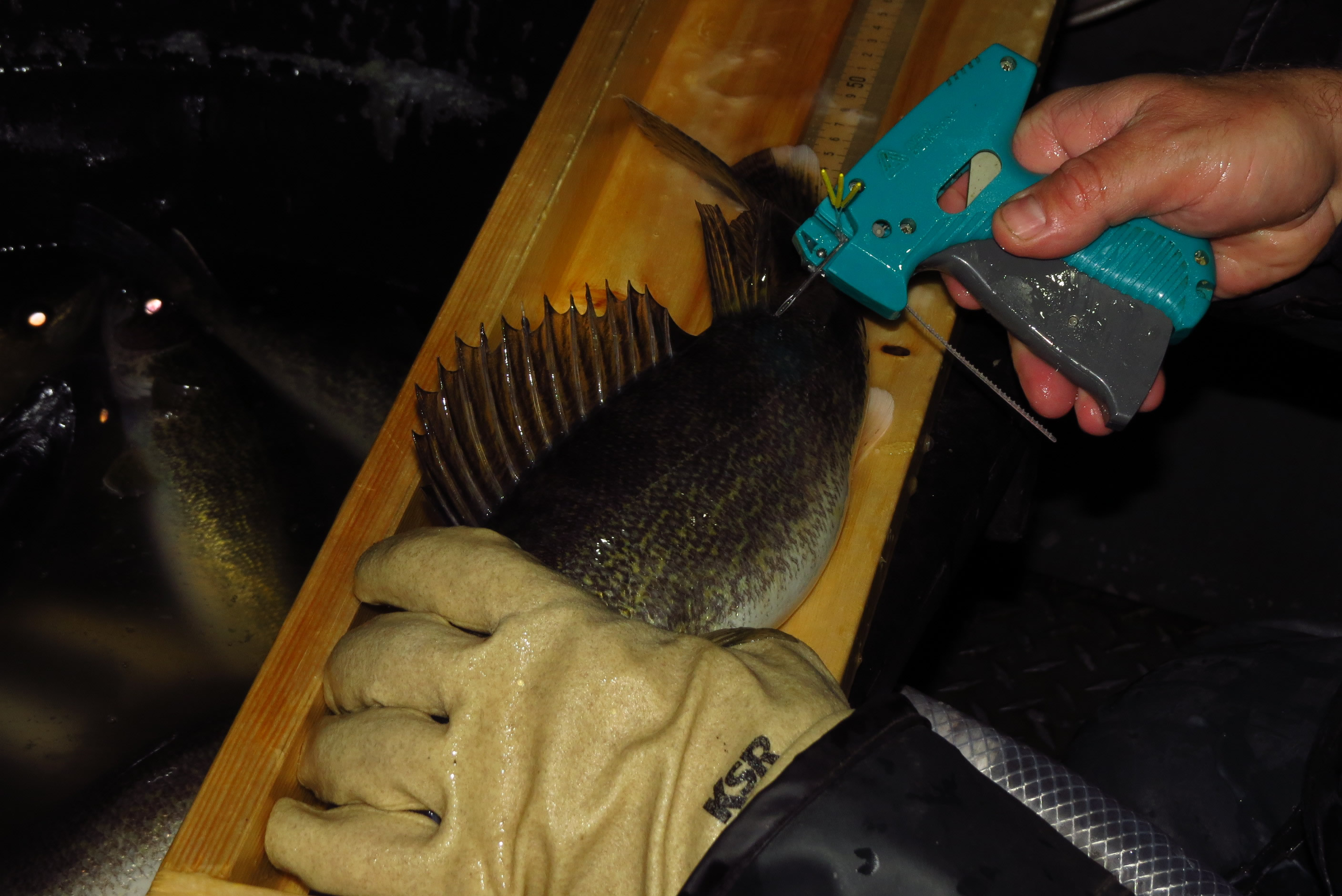 A harmless method is used to attached a tag to this walleye during the 2018 population assessment. 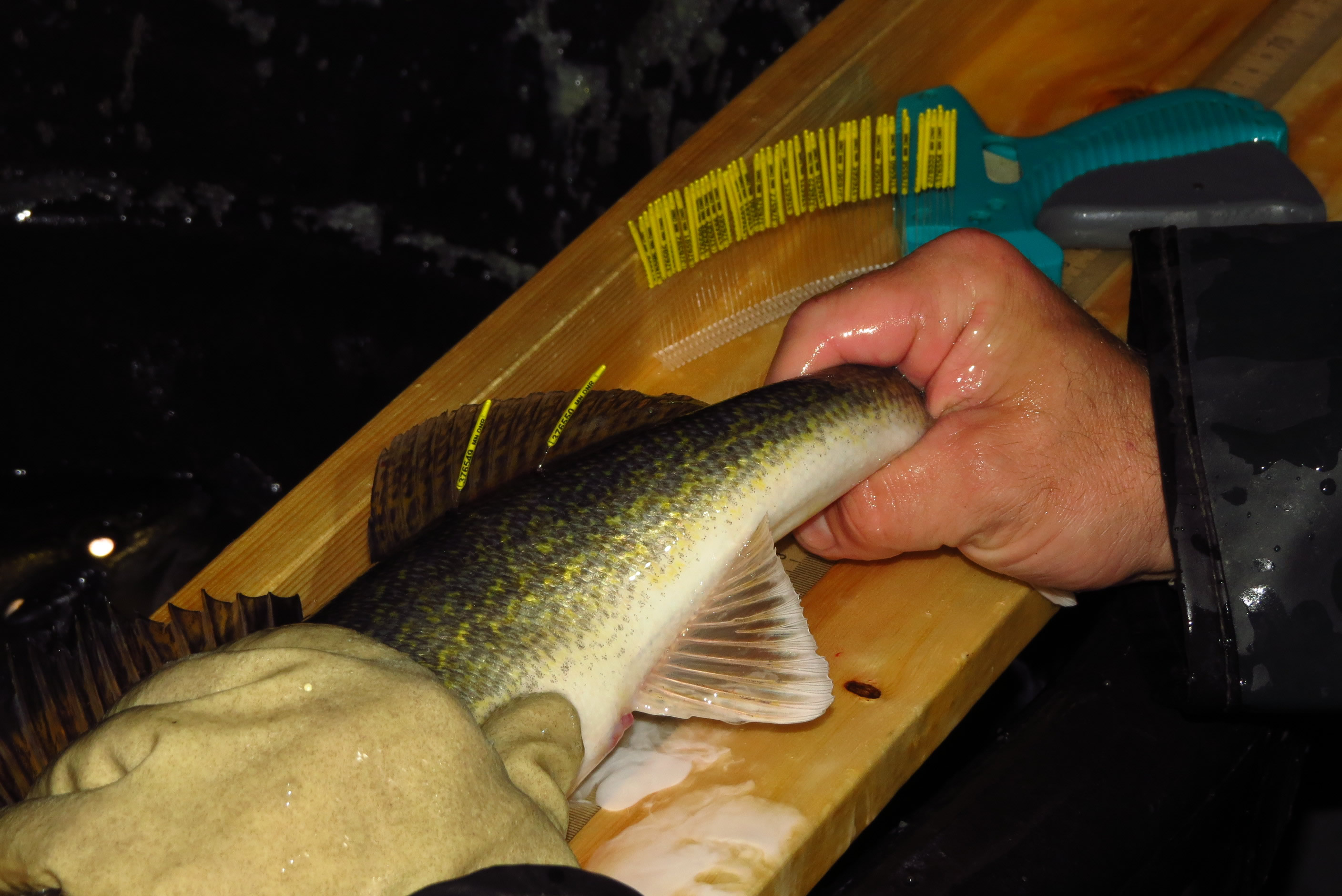 A walleye with its tags in place.

During the spring and early summer of 2018, the DNR in cooperation with Minnesota Pollution Control Agency, Great Lakes Indian Fish and Wildlife Commission, the Fond du Lac Band of Lake Superior Chippewa and citizen volunteers completed a walleye population estimate on Mille Lacs Lake. The study was conducted to estimate how many walleye longer than 14 inches are in Mille Lacs Lake. Walleye longer than 14 inches are considered the most desirable size to anglers in Mille Lacs.

In its simplest form, this method of estimating the number of animals in a population is called the Lincoln-Petersen Method. This method requires that sex ratios and size distributions between the tagging and recapture events to be similar. Because males are easier to catch during spawning and females are easier to catch after spawning, a modification of the Lincoln-Petersen Method was used.

Using electrofishing gear at night, crews tagged just under 20,000 walleye from May 2 through May 10. Each walleye was tagged with two individually numbered yellow tags. Two tags were used so that tag loss could be evaluated, as unaccounted tag loss can affect the population estimate.

The recapture phase of the project started on May 20, and was finally completed on June 14. Gill nets were used to catch the walleye during the recapture phase. In order to minimize the number of walleye that died from being caught in the gill nets, the nets were set for less than one hour. This allowed us to release most of the sampled walleye unharmed. Crews worked two shifts, covering the day from 8 a.m. until approximately 1 a.m. the following morning. Throughout the five-week recapture period, 154 tagged walleye were recaptured and just over 6,500 untagged walleye were caught.

The results are in 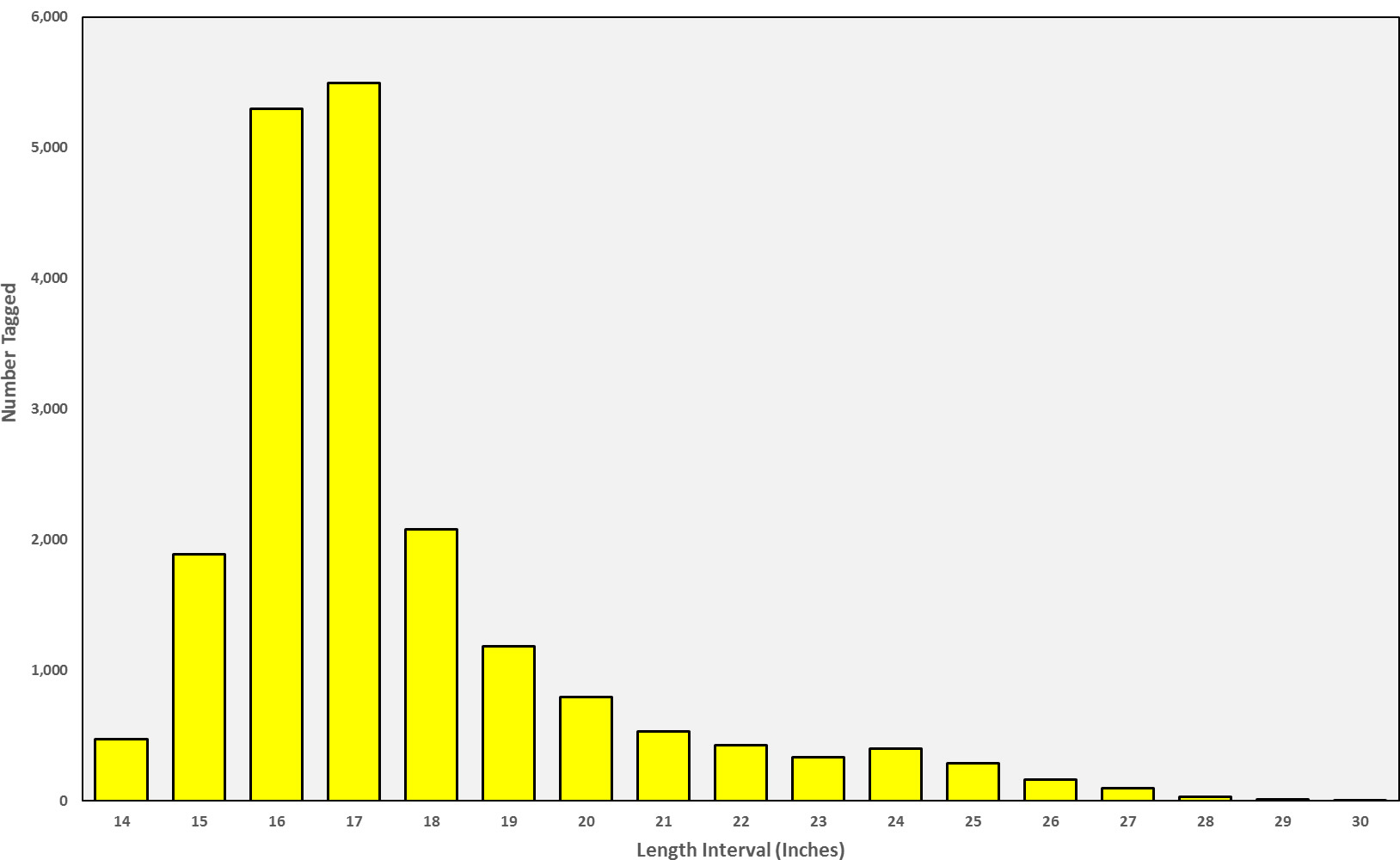 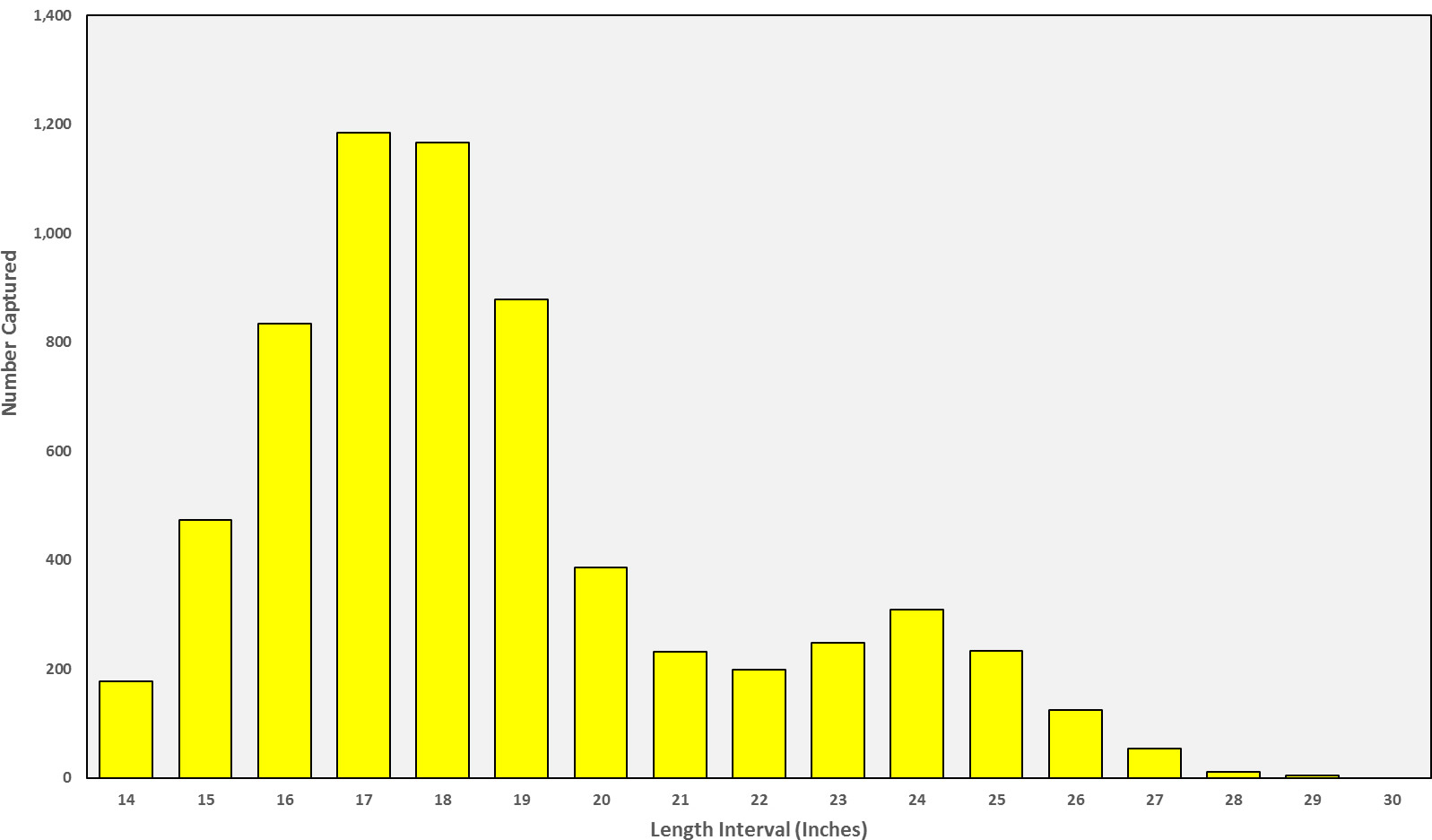 If you catch a tagged walleye, please record the tag numbers (if you don't have pencil and paper handy, consider taking a picture of the tags), the length of the fish and where you caught the fish. You can then report the fish on the tagged fish reporting page. In return, you will receive information we collected at the time the fish was tagged and any other information submitted by anglers that reported the fish previously.

The northern pike population in Mille Lacs is managed to provide a trophy fishery, while still allowing harvest of smaller individuals. In order to monitor the size of northern pike the staff at the Mille Lacs fisheries office set non-lethal nets in rivers shortly before ice-out, and in the lake immediately after ice out to capture spawning northern pike. Pike will move into rivers and flooded wetlands seeking vegetation to spawn on, so these areas are targeted during this survey. The fish are measured and sex and maturity is determined before they are released.

This specific northern pike survey began in 2019 and has been completed annually since then with the exception of 2020 due to complications with covid restrictions. The data gives fisheries managers a look at the maximum size and the overall size structure of the spawning population. Three years of data has shown that Mille Lacs has a good size distribution with some trophy fish in the mix. Lengths of all Northern Pike sampled are shown in the figure below.

The northern pike surveys will continue in future years and as more years of data are collected, we will be able to monitor trends over time. The information we collect through this survey, our fall gill netting survey and the creel survey will all help to inform management decisions for northern pike in Mille Lacs Lake. This survey also provides one of the best opportunities for school groups and other interested parties to come watch and visit with Mille Lacs fisheries staff.

Other Species We Caught

In addition to the northern pike, we also typically catch white sucker, black crappie, bluegill and pumpkinseed sunfish, yellow perch and an occasional muskellunge. The most memorable muskellunge so far was longer than our 50 inch long measuring board! All of the muskellunge were healthy, fat and left a lasting impression. 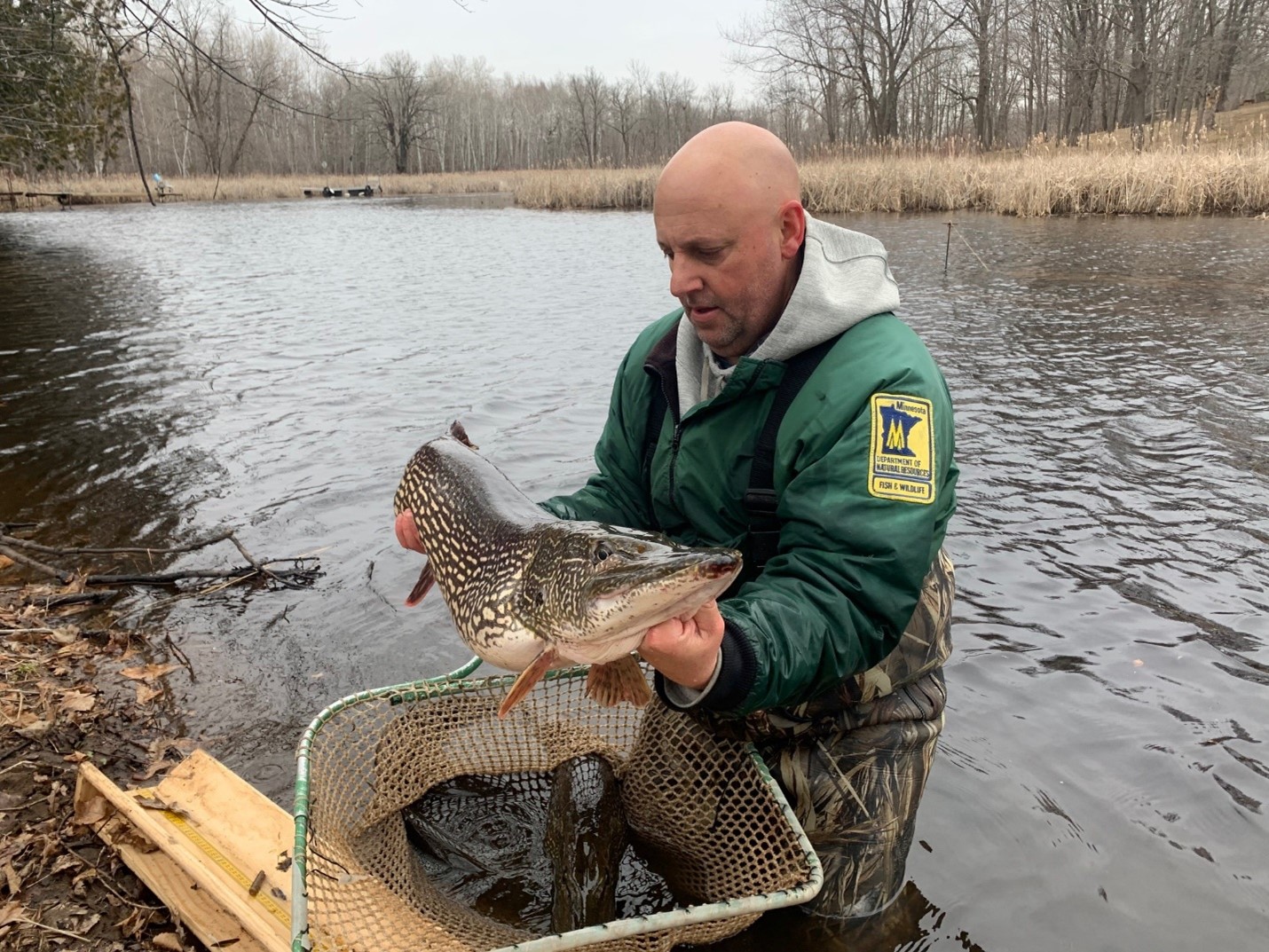 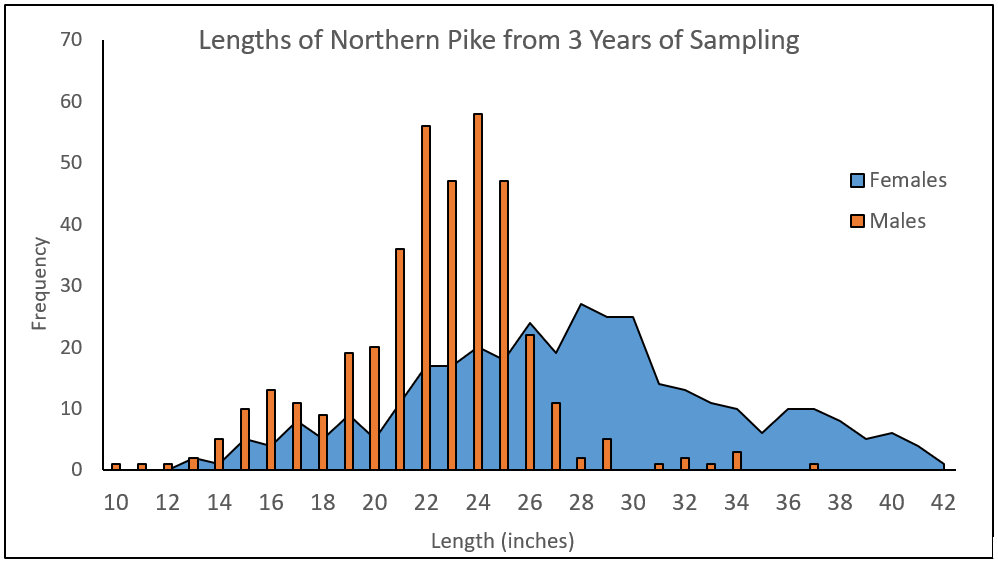 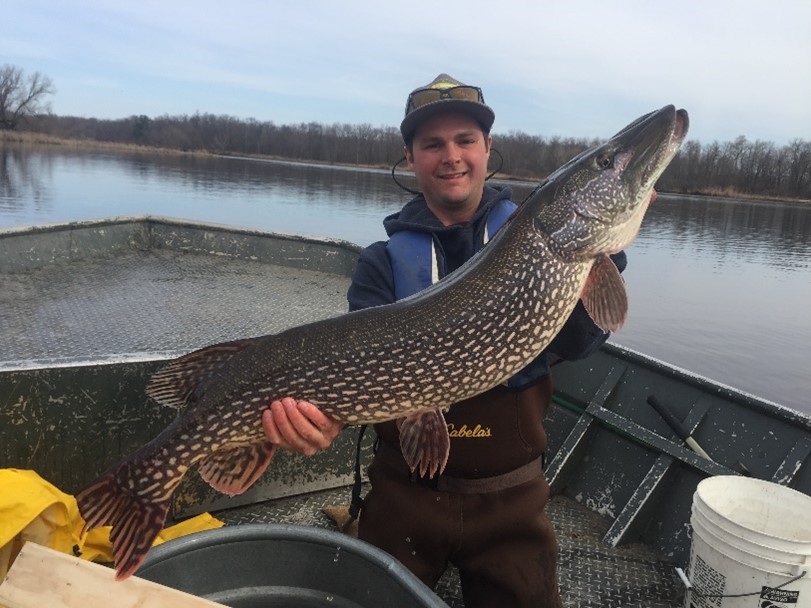 A big muskellunge too large to measure.