For each of the five components, their health index scores are combined to create an average overall component health score.

What does the Biology score show?

The combined four biology indices reveal a pattern of lower scores within the Minnesota and Red River basins. The very low Terrestrial Habitat Quality scores appear to be the primary driver of this trend. The overall range statewide is quite narrow particularly when viewing the mean scores. 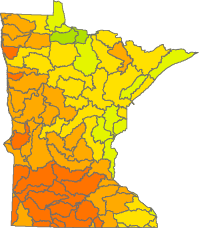 Four biology index values (below) are combined into one mean (average) biology score for each watershed. The overall mean score for Biology reveals statewide trends in system health. Although it may mask any extreme values, it illustrates an overall gradient in results by basin and region. The mean can also be used to compare similar watersheds, such as upstream or downstream within the same basin.  View the mean score together with the index scores to discover how different index values influence the overall mean.

The mean biology scores generally decrease from north to south and from east to west across Minnesota, although the range of values is quite narrow. The pattern by index is more variable, with the largest range in results in the Terrestrial Habitat Quality index. Very low Terrestrial Habitat Quality scores are predominant throughout the Red River, Minnesota and Lower Mississippi major river basins. Stream Species and Species Richness scores are slightly higher in these same basins. At-Risk Species Richness scores are higher in the St. Croix basin and the southeast blufflands. Northern Minnesota scores are only slightly higher than the other regions of Minnesota, in part due to a low richness of At-Risk Species in those watersheds.

In many parts of Minnesota, the lack of quality terrestrial habitat is extensive. This lack of habitat may be limiting species distribution and richness as reflected in the other indices.

The Species Richness scores include both terrestrial and aquatic species and show a trend toward higher richness in east central Minnesota. The higher scores reflect the increase in richness related to unique niche habitats found in the St. Croix Basin; as well as the breeding bird survey pattern of increased species counts through central Minnesota.

Currently, this component does not include data on the health status of Minnesota's many lakes. An aquatic habitat quality index is planned and this may incorporate aquatic lake IBI (index of biotic integrity) data as well as other habitat parameters. This work will be coordinated with a planned update to the terrestrial habitat quality model. The habitat model is scheduled to be refined and recalculated with newer land cover data. The refinement will include reducing the negative impact of lakes causing "fragmentation" of terrestrial habitat in modeling results.