While this year will be different due to COVID-19, plans are still under way to monitor the lake vegetation response. Early visual confirmation of installed plants bodes well, however, we need to see continued growth as the water warms. The hope is a good portion of the plants that initiated naturally during the drawdown, will also begin to flourish this year.

Whether you are out just enjoying the lake, recreating, or fishing, please be aware that due to busy schedules and changes in work, the Benton Sheriff's water patrol has not had an opportunity to place the no wake buoys or hazard markers out on the channel or on the lake as of May 1, 2020. We do know there are plans to install them as soon as possible.

The natural pattern of water levels on the Upper Mississippi River included a spring flood followed by low water levels during summer. For centuries this pattern created ideal habitat for hundreds of species of migratory and resident birds, including tundra swans, bald eagles, and spotted sandpipers.

When locks and dams were constructed during the 1930s, they changed this pattern and eliminated the natural low water conditions. Over time this has resulted in declines in aquatic vegetation, and many areas have converted to more turbid, open water conditions with poor habitat for fish and wildlife. 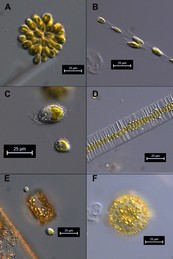 That’s right, not all algae is bad – we’re looking for the right kind of algae and that’s what was found.

When the St. Cloud State University Phytoplankton Laboratory visited Little Rock Lake, a plankton sample was obtained near the public access dock near Highway 10. The composition of the phytoplankton community was observed and digitally imaged at SCSU.

The species composition was dominated by golden algae, which is characteristic of a spring algal bloom in a healthy aquatic system. A species community of this composition has not been recorded from Little Rock Lake in over a decade. The golden algae represent one of three major algal groups found in aquatic systems. The other two groups are the green algae and the cyanobacteria.

The golden algae are regarded as the best ecologically as they produce high energy oils via photosynthesis that supports a robust fishery structure. In past years, Little Rock Lake has been dominated by cyanobacteria, which are the worst algal group ecologically. These algae, cyanobacteria, provide little nutritional value to the food web and certain species can produce toxins which represent a serious public safety concern.

The appearance of this spring golden algae bloom is the first confirmation that the draw down activities conducted last year yielded positive benefit to the system. While it is likely that as the seasons progresses the golden algae community will be followed by green algae and ultimately cyanobacteria, this cycle is normal in most healthy shallow lake systems.

The presence of this flora is good news but not necessarily a permanent reoccurring event in the system. It represents a step forward that must be maintained by continued communal efforts.