A Cornell University research team’s finding of traces of the Viral Hemorrhagic Septicemia Virus (VHSV) in fish inhabiting Wisconsin and Michigan waters of Lake Superior is yet another reminder that anglers and boaters play an increasingly important role in preventing the spread of this fish virus and invasive exotic species.

Lake Superior is a potential gateway for VHSV to enter Minnesota. The DNR has created VHSV surveillance zones and taken additional steps to prepare for this with changes in fisheries management activities, dead bait regulations and labeling requirements, disease surveillance and legislation.

With the possible entry of VHS into Minnesota waters of Lake Superior and other parts of the state, it is incumbent upon all users of the state's waters to remember to follow existing requirements:

Assuming all users of Lake Superior follow preventive measures as those listed above, no additional changes for recreational or commercial fishermen are likely at this time; however, smelt and baitfish like smelt taken from Lake Superior or its tributaries must be labeled as such and may not be used for bait in any other waters of the state.

A virus that spreads an extremely serious disease to fresh and saltwater fish.

At a low level of infection, fish might not display any symptoms. As the infection becomes greater, fish will display widespread hemorrhages (bleeding) throughout body surface (eye, skin and fins) and within the internal organs (swim bladder, intestine, kidney etc). Because of the bleeding, gills and liver might appear pale. Sick fish often will be listless, swim in circles and are frequently observed at the surface of the water. 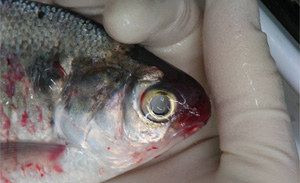 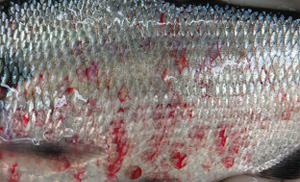 Note: Confirming VHSV infection requires sophisticated laboratory testing. A diagnosis cannot be made based solely on observation because many different diseases of fish have very similar symptoms.

View the list of common Minnesota fishes that are VHSV-susceptible.

Where has the disease been found?

The disease has been found in Lake Huron, Lake St. Clair, Lake Erie, Lake Ontario, Lake Michigan, Lake Superior and the St. Lawrence River in New York. The virus has also been detected in several inland lakes including Budd Lake in Michigan and Lake Winnebago in Wisconsin. The Minnesota DNR actively monitors and tests for the VHS virus. So far, the virus has not been detected in the inland waters of Minnesota.

If you would like to find out the most recent VHSV-infected sites, call the DNR Pathology Lab at 651-259-5096.

Are fish with the virus safe to eat?

The virus does not have any impact on humans, through direct contact or via fish consumption.

How can I prevent the spread?

Do not move live fish between waterbodies. Dispose of unwanted baitfish and fish parts in the trash.

Do not move any water between waterbodies. Drain water from boat, motor, bilge, livewells and bait containers before
leaving the water access.