Helping Turtles Across the Road

Although pre-dating dinosaurs by several million years, turtles everywhere are fast disappearing today. The “hide in my shell and wait it out” strategy that has enabled turtles to weather the geologic changes leading to the extinction of countless other species, however, has proven of little use in surviving the peril posed by fast moving trucks and cars.

Roadway mortality, in fact, is believed to be a major factor in turtle population declines throughout the United States. Helping these typically inoffensive animals safely across roads is therefore an important and valuable contribution to the preservation of North America’s turtles. Turtles injured while trying to cross the road may be taken to your nearest permitted wildlife rehabilitator. 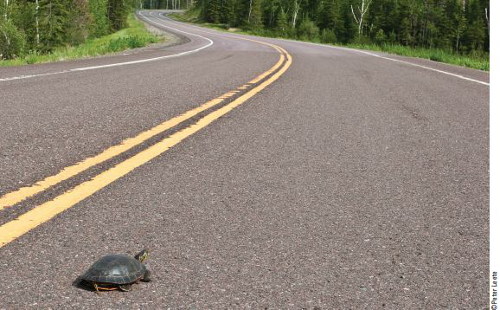 Unlike the infamous chicken of many riddles, turtles cross roads not just to get to the other side but because turtles actually have someplace to go. In Minnesota, where all turtles are mainly aquatic, overland journeys usually occur: (1) in connection with seasonal movements between different wetland habitats, (2) during the annual early summer nesting migration of egg laden females, or (3) when newly hatched youngsters seek out the backwaters and ponds that will serve as their permanent home. Turtles can travel many miles during a single year, and may even be found far from water; this is no need for concern. Turtles crossing roads in late-May and June are often moving to familiar nesting locations.

Helping turtles safely across roads, particularly females with eggs, is vital to the preservation of regional populations. The following important points should be remembered if this activity is to remain an effective turtle conservation tool.

Despite its threatened species status, the Blanding’s Turtle is still fairly abundant in some areas of Minnesota (such as the Anoka Sand Plain Subsection), however few observations of young or hatchling turtles exist (most observations are of large adult turtles). Blanding's Turtle populations face significant threats to long-term survival such as habitat loss, degradation and fragmentation, road mortality, and potentially climate change. The state threatened Wood Turtle is not doing as well in Minnesota due in large part to loss and degradation of habitat. Both species remain legally protected throughout all of Minnesota and technically may not be handled or possessed without a special permit. However, in life or death situations we recommend moving Blanding's and Wood Turtles a few feet off the road to safety. Unfortunately, these rare turtles are sometimes illegally collected for personal pets. To ensure that your good intentions are clear to law enforcement officers, or other that may be watching, do NOT bring the turtle into an automobile or place in a container, even temporarily, while helping the turtle out of harm's way. When possible, document your encounter for these threatened species with a couple photographs, be sure to note the date and your location to the best of your ability (use nearest house address, cross-street, etc.). Please e-mail or call your regional Nongame Wildlife Program staff to report observations. Learn more about Minnesota's turtle diversity.

What About Snappers and Softshells

Although many turtles attempt to bite when restrained, Snapping Turtles and Spiny Softshells (often referred to as "leatherbacks") are particularly aggressive, surprisingly quick and will bite with little provocation. In addition, exceptionally long necks enable Snappers and Softshells to reach around and deliver painful bites if picked up by the sides of the shell like other turtles.

For these reasons it is recommended that only experienced handlers ever attempt to lift Snapping Turtles or Softshells clear of the ground. Snapping Turtles should NEVER be picked up by the tail! This can damage the Snapping Turtles spinal cord. Grabbing an aggressive turtle by one rear leg while supporting the turtle from below with your other hand is safe for both you and the turtle. Others wishing to assist Snappers or Softshells cross roads are advised to use branches, broomsticks, snow shovels, or similar objects to prod the animals along from behind. If bitten, such objects may also be used to drag the turtles to roadway edges.

For additional information on Blanding’s Turtle and other turtles in Minnesota or elsewhere in the United States the following resources are highly recommended.