Descriptions of Diplodia shoot blight can be found in Diplodia Blight of Pines and Shoot and branch damage in the Red Pine Web-Based Forest Management Guide.

Diplodia causes top-kill and dieback on scattered mature pines after severe drought. The bark on killed tops often gets covered in the small, black, pimple-like fruiting bodies. Older pines die in some cases.

Recently planted seedlings can die suddenly from collar rot caused by Diplodia. Bark at the root collar and lower stem becomes covered with fruiting bodies and the wood underneath stains black.

Diplodia fruiting bodies grow on killed needles, branches, bark, and cones, and can survive for at least five years. The spores from fruiting bodies are best seen under a microscope, and a plant diagnostic lab usually needs to confirm Diplodia infection. 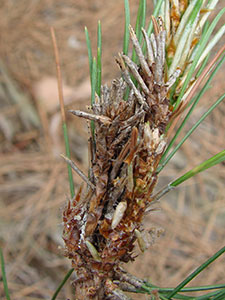 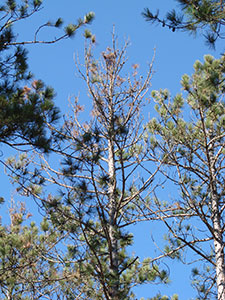 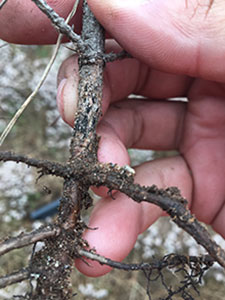 A dense array of Diplodia's black fruiting bodies on the root collar bark of a dead red pine seedling.

Just because you can't see symptoms or fruiting bodies does not mean Diplodia is not there. Several studies have shown that invisible (latent) infections are common.

Another common fungal disease on red pine is Sirococcus shoot blight, although it isn't as widespread or as severe as Diplodia in Minnesota. It cannot be distinguished from Diplodia without a microscope.

Scleroderris canker mimics Diplodia but is not common. Besides diseases, insects can kill red and jack pine shoots, mimicking symptoms of Diplodia. Most of these pests do not kill pines and are not perennial threats.