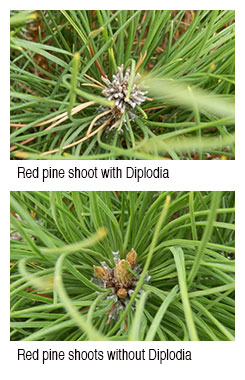 Diplodia sapinea is a fungus that causes shoot blight (dead branch tips), branch death, decreased growth, and sometimes death to several species of pine. Stressed mature pines can be severely impacted by Diplodia. On seedlings, Diplodia can cause a distinct disease called collar rot, causing sudden death. Although its origin remains unknown, Diplodia is common in the Lake States. Red (Norway), Austrian, and Scots pines are highly susceptible to Diplodia. Jack pine also can become infected (along with other two- and three-needled pines). Diplodia does not affect white pine.

Diplodia is widespread across Minnesota and the Lake States region. Forest and tree nursery managers frequently encounter shoot blight on understory red pines and lower canopies of mature red pines. Diplodia can survive on dead pine needles, branches, and cones for at least 5 years, and studies have shown that non-visible (latent) infections are common. In 2005, a formal study of 92 red pine sites in Minnesota showed Diplodia was present on at least 97 percent of them.

Diplodia reduces growth rates and can cause mortality in pines. An average of 7.5 percent of red pine growing in young plantations within 160 feet from the edge of a mature red pine plantation died, according to a DNR study. The occurrence of Diplodia shoot blight drastically decreased the farther it was from the edge of the plantation

In a different study , the U.S. Forest Service analyzed the effect of planting pine species in forest openings of different sizes to encourage multi-aged pine stands. Diplodia and/or Sirococcus shoot blight pathogens were common on red pine seedlings that died in all treatments. Seven years after planting, about 10 percent of planted red pine survived in uncut forests, but 50 – 90 percent of planted red pines survived in various sizes of canopy gaps.

Descriptions of Diplodia shoot blight can be found on the U.S. Forest Service publications How to Identify and Control Diplodia Shoot Blight, Collar Rot, and Canker of Conifers, Diplodia Blight of Pines, and web-based Forest Management Guide. 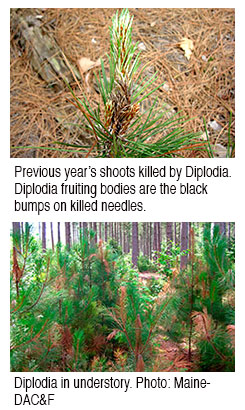 If your primary management goal is to earn revenue from growing red pine, we recommend growing young red pine without an overstory of red or jack pine or at a distance that is at least twice the height of adjacent red and jack pines. Choose species other than red or jack pine to leave as residual trees when clearcutting. If there are only red or jack pines on the site, only leave pines that are free of shoot blight or branch death, and leave them in clumped patterns on the site. Encourage other tree species such as white pine or hardwoods to grow within twice the height of those residual pine clusters. Seedlings should come from a nursery that does not have mature red or jack pine within several hundred feet of seedling beds.
Finally, you should expect a small percentage of planted red pine seedlings to die from non-visible (latent) infections of Diplodia. Another small percentage may die from other insects, diseases, animals, and weather-related factors. When there have been droughts following plantings, large percentages of red pine seedlings have died from these latent infections and other diseases (e.g., Armillaria root disease). At this time, latent Diplodia infections are unavoidable since research has not investigated when infections occur. One study did demonstrate that Diplodia can survive on or in red and jack pine seeds, even when the surfaces of the seeds were disinfested. Generally, when state nurseries in Minnesota and Wisconsin discover over 10 percent of red pine seedlings have latent infections of Diplodia at root collars, they do not sell that crop.