The information and resources on this webpage are designed to help woodland landowners in northern Minnesota. The Agassiz Lowlands and Littlefork-Vermilion Uplands subsections span 5,304,361 acres in all or parts of Beltrami, Clearwater, Itasca, Koochiching, Lake of the Woods, Marshall, Pennington, Roseau, and St. Louis counties.

These ecologically rich places are home to thousands of lakes, vast stretches of the northern forest, lush wetlands, diverse wildlife, and an important wintering area for boreal birds 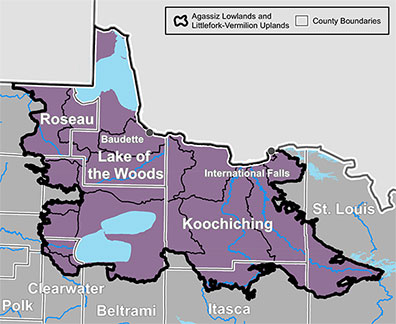 Northern Minnesota is home to a multitude of wildlife species, including some that are rare, declining, or threatened. The DNR refers to these as species in greatest conservation need. About 350 species are given this classification in Minnesota. Examples from the Agassiz Lowlands and Littlefork–Vermilion Uplands include Canada lynx, northern bog lemmings, spruce grouse, short‑eared owls, sharp-tailed grouse, black-backed woodpeckers, yellow rails, boreal owls, boreal chickadees, Connecticut warbler, red-necked grebes, bog coppers, and lake sturgeon.

The list of plants for this area is exhausting. From small flowers to ferns, to towering pines, naming them all is impossible! Getting familiar with the common native trees in your area is a great way to start.

Wood lot Tree Planting and Care learn about native landscaping, what trees to plant, where to find native tree stock, and what to know before you plant. Find the right tree for your property.

Agassiz Lowlands and Littlefork–Vermilion Uplands subsections are flat and poorly drained. About half of the area consists of clayey deposits from Glacial Lake Agassiz. Primarily bogs, swamps, fens, and other peatland vegetation cover the lake deposits. On the eastern edge, the peatlands are acidic, deep, and old (more than 4,000 years) and support extensive areas of acid peatland communities such as black spruce bogs and poor swamp forests. At the western edge, the peatlands are richer in minerals, shallower, and younger (about 1,000 years). Tamarack swamps, rich fens, and other rich peatland communities tend to be common here. Some areas, especially on the eastern and southeastern borders, have uplands formed of glacial till that was eroded and flattened by wave action from Glacial Lake Agassiz. Mesic (between wet and dry) and wet forests of aspen, paper birch, spruce, balsam fir, white cedar, and black ash are typical in these areas. Uplands formed of sandy shoreline deposits that mark recessional stages of Glacial Lake Agassiz are present. These low, sandy uplands are less extensive than either the peatlands or glacial till deposits and are characterized by fire-dependent forests of jack pine or red pine. Unique peatland plant communities harbor rare or unusual species, including orchids and carnivorous plants. The majority of the land is now classified as lowland conifer forest, upland deciduous forest, and aquatic environments (swamp and wetlands).

Before European settlement, the western half was mostly peatland consisting of sedge fen, black spruce-sphagnum bog, and white cedar-black ash swamp. The eastern half consisted of aspen-birch forest that would eventually become dominated by white pine, white spruce, and balsam fir. Fire occurred in the peatlands. Insect infestations, such as spruce budworm, probably lead to these fires. Water levels fluctuation, caused by short-term climatic changes and by beaver dams, probably contributed to tree mortality. Windthrow was common on poorly drained mineral soils.

The major land uses are forestry and recreation, including birding, hunting, and fishing. Black spruce, jack pine, and quaking aspen are the most common species used for making pulp and sawlogs. Large lakes, including Upper Red, Lower Red, and Lake of the Woods, are associated with recreation and tourism.

While northern Minnesota is in the coniferous forest biome), we use the Ecological Classification System (ECS) to focus landscape information on a more local level. The ECS divides the landscape into progressively smaller areas based on similarities and differences in climate, geology, natural features, and plants. This webpage focuses on the Agassiz Lowlands and Littlefork-Vermilion Uplands subsections, which contain a mix of deciduous and coniferous trees.

A detailed plan was created by the DNR for forests in northern Minnesota to help land managers put their land in context with state land management goals for the area. In addition, the Minnesota Forest Resources Council has created a northern landscape plan to guide any landowners toward common management goals for sustainable forests, clean water, productive forests, and healthy wildlife habitat.

A watershed is the total area of land surrounding a body of water (such as a lake, river, or stream) that drains water into that body. Watersheds can be small or large. Small watersheds surrounding creeks and streams join to create larger watersheds surrounding major rivers. The Rainy River and Red River are the major watersheds in this region. Depending on your land's exact location, your actions can affect the quality of water that will flow into the Hudson Bay or Lake Winnipeg in Canada. 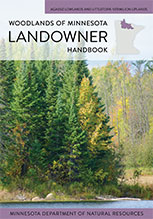 Woodlands of Minnesota Handbook - Agassiz Lowlands and Littlefork-Vermilion Uplands is both a reference and workbook. It contains information on the past and present condition of land in the regions, insight into some of the biggest challenges woodland owners face here, and tips for making and accomplishing goals for your woods.