This area is home to abundant wetlands, large areas of intact forest, diverse wildlife, and one of the state's most popular lakes for fishing—Mille Lacs Lake.

Area covered by the handbook 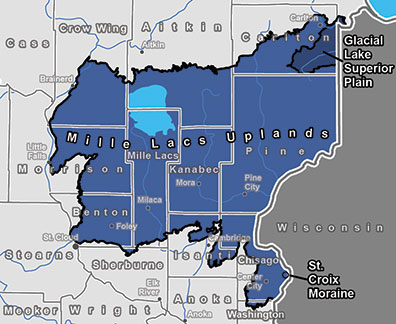 East-central Minnesota is home to a thousands of wildlife species. Learning about the animals that live in your woods is a great way to connect to the habitat. Get to know your critters and keep on the lookout when you walk your property. Minnesota has about 350 species in greatest conservation need that are either rare, declining, or threatened. Examples in your area include red-shouldered hawks, spotted salamanders, northern and southern brook lamprey, Blanding's and wood turtles, and a species of darter (a small fish) found nowhere else in North America except the St. Croix River and several of its tributaries, including the Snake, Kettle, and Sunrise rivers.

Minnesota Biological Survey » collects data on rare plants and animals, native plant communities, and landscapes. Use it to find out about species in your county.

Pollinators - learn about what you can do to help these important insects and birds.

The list of plants for this area is exhausting. From small flowers to ferns, to towering pines, it would be impossible to name them all! Getting familiar with the common native trees in your area is a great way to start. Find the right tree for your property.

Wood lot Tree Planting and Care » learn about native landscaping, what trees to plant, where to find native tree stock, and what to know before you plant.

To more easily keep track of all the plants, ecologists use native plant communities, which are groups of native plants that interact with each other and with their environment. These groups of native plant species form recognizable units, such as oak savannas, pine forests, or marshes, that tend to repeat over space and time. The native plant communities tie into the ecological classification system that describes a given landscape area of the state. East-Central Minnesota include Central Dry Oak-Aspen Woodland, Northern Mesic Hardwood Forest (mesic means between wet and dry), or Northern Very Wet Ash Swamp. Nine types of forested communities found in east-central Minnesota are considered "imperiled" statewide by the DNR, meaning they are rare or threatened within Minnesota. It is especially important to protect these communities from conversion to other land uses.

The Mille Lacs Uplands and the Glacial Lake Superior Plain subsections covered in this handbook encompass approximately 3.5 million acres. This area consists of gently rolling plains covered by glacial sediment deposits called drift or till formed into hills and ridges called drumlins or moraines that are separated by shallow peat-filled depressions. These features are relics of the last ice age when glaciers compressed the landscape. Soils in this region are acidic sandy or silty loams and are usually rocky from glacial deposits. The Glacial Lake Superior Plain has abundant red clay sediments that wash into Lake Superior.

Before European settlement, a mix of coniferous and deciduous forests dominated this landscape. Along the southern boundary, maple-basswood forests were prevalent. In the northeastern corner, the forests were dominated by conifers such as spruce, fir, cedar, white pine, and eastern hemlock (marking the farthest west this species extends in the United States). Peatlands were present in the valleys between drumlins throughout the region and were inhabited by black spruce, white cedar, black ash, sphagnum mosses, and a variety of wetland shrubs and sedges.

The landscape has changed in recent times, particularly nearest to the Twin Cities metro area where pressure from residential development is highest. Agriculture is also a major land use in the region today with over 1 million acres (nearly 30 percent) of the area used for growing crops or pasture.2 Despite ongoing development pressure, forestry remains an important driver of the local economy. The diversity of tree species found in the region are used in the production of pulp, paper, lumber, biomass, and other products. Recreation is also an important regional industry. Fishing for walleye in Mille Lacs Lake and trout in the Nemadji River and tributaries are especially popular.

While east-central Minnesota contain a combination of deciduous and coniferous forest, we use the Ecological Classification System (ECS) to focus landscape information on a more local level. The ECS divides the landscape into progressively smaller areas based on similarities and differences in climate, geology, natural features, and plants. This webpage focuses on two ECS subsections: Mille Lacs Uplands (located within the Western Superior Uplands Section) and Glacial Lake Superior Plain (located within the Southern Superior Uplands Section), which both contain a combination of deciduous and coniferous forest.

A detailed plan created by the DNR for the Western Superior Uplands Section helps land managers put their land in context with state land management goals for the area. In addition, the Minnesota Forest Resources Council has created a East Central Landscape Management Plan to guide any landowners toward common management goals for sustainable forests, clean water, productive forests, and healthy wildlife habitat.

A watershed is the total area of land surrounding a body of water (such as a lake, river, or stream) that drains water into that body. Small watersheds surrounding creeks and streams join to create larger watersheds surrounding major rivers. East-central Minnesota is located along a great divide in North American water flow. Depending on your land's exact location, your actions can affect the quality of water that will flow either into the Great Lakes and ultimately the Gulf of St. Lawrence by way of the St. Louis and Nemadji rivers, or into the Gulf of Mexico by way of the Mississippi River.