The information and resources on this webpage are designed to help woodland landowners in southeast Minnesota. The Rochester Plateau and Blufflands area spans all or parts of Dakota, Dodge, Fillmore, Goodhue, Houston, Mower, Olmsted, Rice, Wabasha, Washington, and Winona counties.

This region, also known as the Driftless Area, is quite different from the rest of the state because glaciers missed this area during the last ice age. 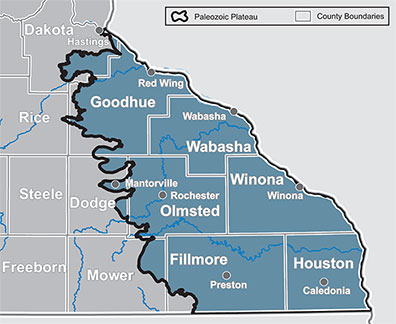 Southeast Minnesota is home a multitude of wildlife species. Learning about the animals that live in your woods is a great way to connect to the habitat. Get to know your critters and keep on the lookout when you walk your property. Minnesota has about 350 species in greatest conservation need that are either rare, declining, or threatened. Examples in your area include timber rattlesnake, blue-winged warbler, Leonard's skipper, woodland vole, pickerel frog, Ozark minnow, and Blanding's turtle.

The list of plants for this area is exhausting. From small flowers, to ferns, to towering pines, naming them all is impossible! Getting familiar with the common native trees in your area is a great way to start. Find the right tree for your property.
Wood lot Tree Planting and Care - learn about native landscaping, what trees to plant, where to find native tree stock, and what to know before you plant.

The Rochester Plateau and Blufflands subsections encompasses approximately 2.6 million acres, which consists of rugged bluffs and valleys. Although originally a plateau underlain by rather flat sedimentary rock, in the past 10,000 years streams and tributaries, such as the Root, Whitewater, Zumbro, and Cannon rivers, have eroded the landscape on their way to the Mississippi River. The remains of the plateau are most evident along the western part of the area and least evident on the eastern part of the area near the Mississippi River. Unique and diverse flora and fauna live in the abundant rock outcroppings. This area of Minnesota is nearly absent of glacial deposits, and has deep, narrow valleys with cool, fast-flowing streams. Finally, the underlying, porous limestone allows water to percolate swiftly underground creating numerous caves, sinkholes, and underground streams—all features common in karst topography.

Before European settlement, factors that most influenced vegetation were slope, aspect, flooding, and fire. Most of the area is covered by rather uniform deposits of soil formed by loess or alluvium. Prairies occupied the flat, fire-prone remnants of the plateau in the west. Woody vegetation developed on steep slopes in areas cut by rivers and protected from wildfires. Dry prairies formed at the tops of southwest-facing bluffs with oak woodland developing downslope, especially on northward- and eastward-slopes. Mesic (mesic means between wet and dry) forests prevailed on north- and east-facing slopes, usually dominated by oak on the upper parts, with basswood and then sugar maple increasing downhill. Wet-mesic forests of basswood, sugar maple, black maple, elm, bur oak, black ash, and walnut were present on level, silty valley bottoms on terrain divided by flowing water. Sandy valley bottoms supported dry prairies, black oak woodlands, and rarely, jack pine savannas and woodlands. The bottomlands of broad valleys such as that of the Mississippi River were covered with floodplain forests of silver maple and river birch. Forests of silver maple, elm, green ash, hackberry, cottonwood, basswood, and swamp white oak thrived on higher river terraces. Plant communities grew along the river's shore and on sand bars. Steep rock walls with rocky collections of debris at their base provided habitat for plant and animal communities that thrive in these unique areas. Peatlands were nearly absent, mostly limited to local areas where seeps and springs maintained sufficiently saturated conditions for peat to accumulate.

Southeast Minnesota receives more inches of precipitation than in other parts of the state. Total annual precipitation ranges from 29 inches in the west to 34 inches in the southeast. Of this, 11 to 16 inches falls during the growing season, which lasts for approximately 136 to 156 days.

This landscape has changed in recent times. Agriculture is a major land use important to the local economy today. While 55 percent (approximately 1.5 million acres) are used for pasture or growing crops, 22 percent is forested, mostly in small, fragmented patches on steep side slopes of terraces in the Blufflands subsection. The steep slopes and karst topography make this area particularly susceptible to soil erosion and groundwater contamination by nitrates and phosphates resulting from agricultural activities.

While southeast Minnesota is in the deciduous forest biome (or Eastern Broadleaf Forest), we use the Ecological Classification System (ECS) to focus landscape information on a more local level. The ECS divides the landscape into progressively smaller areas based on similarities and differences in climate, geology, natural features, and plants. This webpage focuses on Rochester Plateau and Blufflands subsections, which both contain a combination of deciduous and coniferous trees.

A detailed plan created by the DNR for the Rochester Plateau and Blufflands subsections help land managers put their land in context with state land management goals for the area. In addition, the Minnesota Forest Resources Council has created a Southeast Landscape Plan to guide any landowners toward common management goals for sustainable forests, clean water, productive forests, and healthy wildlife habitat.

A watershed is the total area of land surrounding a body of water (such as a lake, river, or stream) that drains water into that body. Watersheds can be small or large. Small watersheds surrounding creeks and streams join to create larger watersheds surrounding major rivers. Ultimately, water in southeast Minnesota flows into the Mississippi River via the Root, Whitewater, Zumbro, and Cannon rivers and numerous single-stream tributaries. The actions you take on your land will affect the quality of water that flows into the Gulf of Mexico by way of the Mississippi River.
What watersheds are and why they are important
Learn more about your watershed